It’s weird how the Marvin cast of babies walk around unsupervised, talk, can grasp object permanence, etc., and really the only thing that marks them out as infants is that they’re short and aren’t potty trained. Almost as if someone just really likes the idea of functional adults shitting themselves deliberately on the regular, and who am I to judge! Ha ha, just kidding, I judge constantly, and in non-shitting judging news, why would a baby be at all interested in a fountain of youth? I guess maybe as a baby he recognizes the extreme jealousy his youth inspires in others and seeks to monetize it; or, conversely, maybe to him “youth” means young adulthood, and he aims to accelerate his fellow babies’ aging process until their physical development matches their mental state. They’re still gonna shit their pants, though! Just a hunch I have about that.

I’d always just pegged Parson Tuttle as an uncomplicated grifter, but now I see he has a much darker design: to use Scripture as a recruiting tool to raise an army of child soldiers, like an Appalachian Kony. Can the women in this community hold the line against the total violent breakdown of their community? 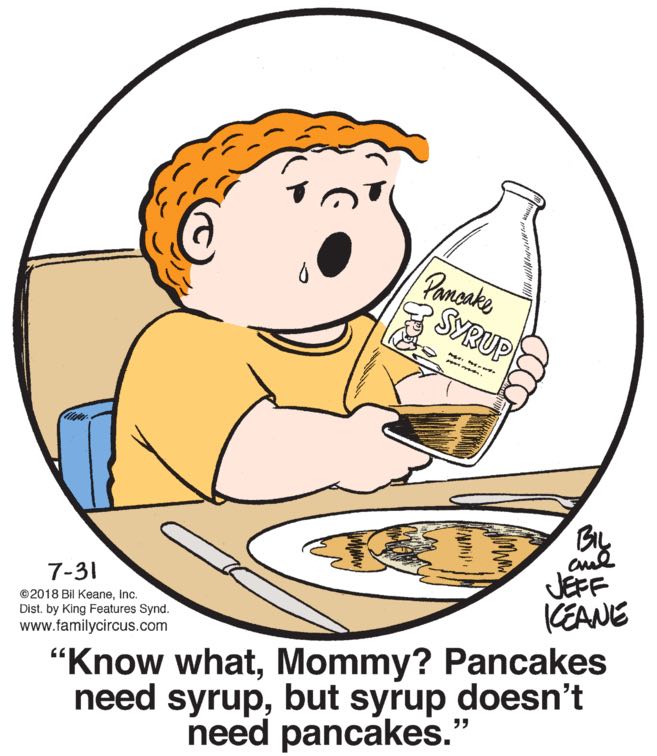 I have to admit that seeing a sugar-drunk Jeffy announcing that he’s discovered he can just guzzle syrup straight from the bottle and plans to continue to do so made me smile. The only way this panel could be even better would be if, instead just a single demure droplet of syrup at the corner of his mouth, he was completely covered in the stuff, like he had poured it over his head and let ooze down and form a delicious, sticky mask. Can’t even open his eyes because of the syrup and happy as a clam, a dumb, gross, syrup-soaked clam.