You may have noticed that I haven’t really commented on Gil Thorp lately; that’s because this storyline, which began with Nut Boy and armed robbery, has turned out to be total snoresville ever since. Today’s strip is noteworthy, though, in that it contains shocking images of Gil Thorp engaging in coaching — not in the usual sense of him holding a clipboard and collecting a paycheck in the general vicinity of high school athletics, but actually attempting to help a member of his basketball team with his play. Gil’s advice — “relax, you’ll be fine, and everyone else we have sucks even worse than you” — leaves a bit to be desired, I suppose, but it’s a start.

Meanwhile, the thirty-first participant in Brenda’s all-weekend sexathon has arrived.

What I’m learning from this Rex Morgan storyline — in which the bored, angry passengers on this strike-stricken death boat are constantly demanding that somebody, anybody pour them a drink — is that the only thing stopping most cruise ships from degenerating into vomit-covered bacchanals are crewmembers trained in the fine art of cutting the lushes off gently. Hope for the livers of all involved has arrived in the form of this friendly off-duty bartender, who probably recognizes the symptoms of alcohol poisoning when he sees them and will start watering the drinks down accordingly. (As a side note, you may think it odd that a bartender would consider a navy blue suit and sharp red tie to be cruisewear, but one of the guys who bartended my wedding was an investment banker, so you never know.) 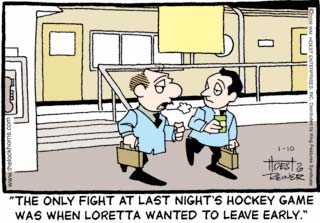 I must admit that I’m charmed by the evocative setting of today’s Lockhorns. Leroy and his nameless, emotionally numb companion are just alighting from the commuter train, heading into work on a chilly morning, carrying their briefcases and coffees. We’ve never really learned what Leroy does for a living; whatever it is, it apparently requires that he wear a baby blue smock for some reason.

Snuffy Smith makes yet another acknowledgement of modern televised entertainment; however, this reference serves only to set up the main joke, which is that Hootin’ Holler’s sole religious institution apparently exists primarily to personally enrich its so-called “parson,” who cheerfully admits as much to one of the community’s most notorious lawbreakers. 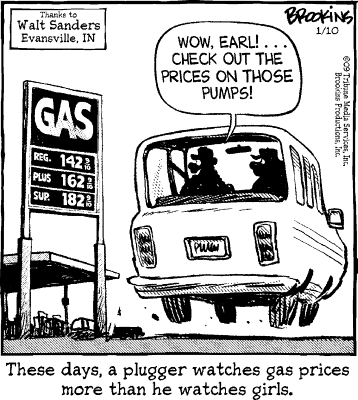