I did a small amount of Googling to try to figure out what “the old ‘neighborhood bank’ plan” was and came up empty, but I assume it was the sort of thing that wasn’t uncommon in the early 20th century, where local, unregulated financial institutions flourished and you could never be entirely sure if you were dealing with a grey-market bank or a ponzi scheme. But today’s Dick Tracy makes it clear how you could ensure your money was safe: just get your lawyer involved and then these undeground, gangster-run pseudo-banks would have to hold onto your money for decades and hand it over to your duly appointed heirs, decades later!

You know, when I was a kid riding a yellow bus to school, we had both a driver and a “bus aide” whose job was to keep us from killing each other so the driver could focus on not killing us in a terrible accident. Is that even a thing anymore? Was it ever a thing in most places? Anyway, Crankshaft has never had any assistance on his bus, and he makes do by just literally not giving a shit about what the kids do, not even bothering to look at them or spend any time thinking about them, really. 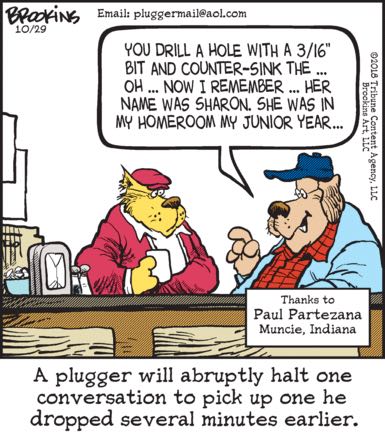 Pluggers seems like they’re doing OK at first, but when you talk to them for more than a few minutes, the extent of their cognitive decline becomes obvious.