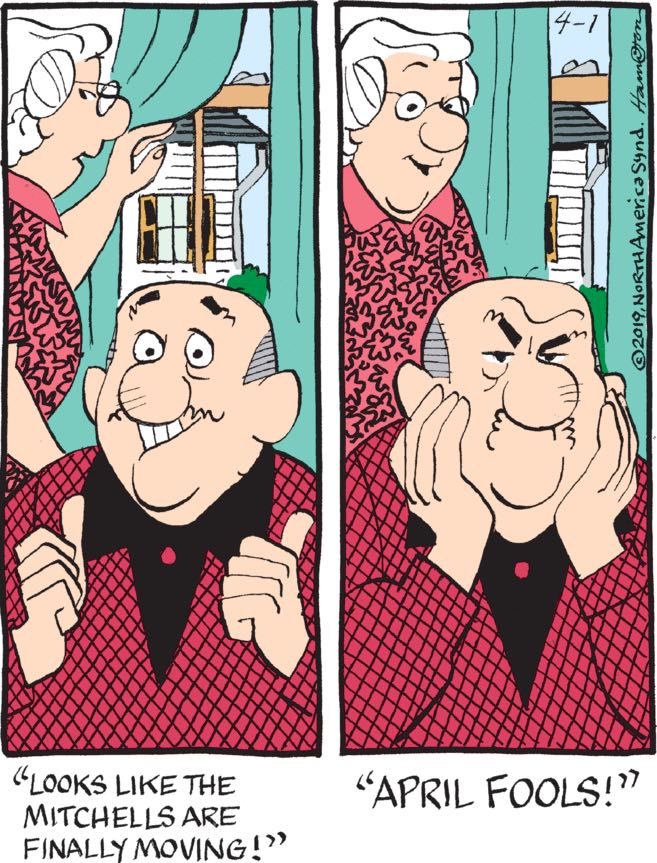 There were a bunch of comics today whose “punchlines” involved characters playing April Fools Day pranklets on each other, and it really affirmed my cranky opinions that (a) April Fools Day is dumb and (b) there are few things less funny in a comic strip than characters doing things that are supposed to be funny within the universe of the comic strip. Still, I kind of enjoyed today’s Dennis the Menace, because in the first panel, we can see that Mr. Wilson’s curmudgeonly demeanor around Dennis is no act. He harbors no secret affection for the lad who’s apparently in his house virtually every day. Nobody’s looking at him here; his face is turned away from Martha, so there’s nobody he’s putting on a performance for. He’s genuinely ecstatic that the little boy who’s made a mockery of the peaceful retirement he spent a lifetime saving for is leaving, and when he finds out that’s a lie — a lie all the more cruel because it comes from his wife, the woman who knows more than anyone how much he wants it to be true — he’s utterly crushed. APRIL FOOLS!!!!!! :) :) :)

Funky Winkerbean, to its credit, constantly does the bit where one character tells a joke that utterly fails to land and then has to explain or justify it, and that explanation is somehow supposed to be the “punchline” of the comic. This strip doesn’t need April Fools Day as an opportunity demonstrate that the whole process of trying to make other people laugh is a frustrating and ultimately fruitless endeavor.

I love how completely gobsmacked Sarah looks in the final panel here. “You mean … there are adults who react to events with normal human emotions, rather than just suffocating everything with a comforting blanket of smug superiority? Unheard of!”