The current Gil Thorp plot is so dull that even I, a noted Gil Thorp obsessive, can’t come up with much to say about it, but I do want to point out some weird art business here, specifically regarding soft-spoken Nancy Kaffer, and specifically regarding soft-spoken Nancy Kaffer’s ears. Like, isn’t kind of odd that her entire, fully formed ears are totally visible and protruding through her otherwise unbroken waterfall of straight hair? As our point of view in each panel gets further away from her, we’re still reminded that yes, her ears really do stick right through her hair like that, we weren’t just seeing it at a very specific angle or anything. It reminds me of when the managing editor at my college newspaper worried that his headshot in his column looked off because you couldn’t see one of his ears in it, so he used Photoshop to copy his visible ear, flip it around, and paste it to the other side of his head, which is to say it looks very bad.

Welp, it looks like Doc and Mark are off on an adventure to find Doc’s lost gold mine, which, I don’t think I mentioned yet, is out in the Sonoran Desert somewhere in southern Arizona, and that facial expression in panel three is definitely one of a man who’s having some second thoughts! You know, thoughts like, “Wow, I’m an old man and we’re about to go spend hours in unforgiving 100+ degree heat. We should get, like … a bottle of water, I guess? Maybe some hats? Am I gonna die out there? I don’t want to die out there, guys.”

Mary has been the master of delicately throwing shade for years, of course. Who could forget the time Tommy was smoking weed in his mother’s apartment and Mary made a casual but completely brutal reference to “whatever Tommy’s smoking” while serving Iris tea? Today she manages to pack even more contempt, mingled with disappointment and disbelief, in an ellipsis: “Money from … you?” Estelle should be more devastated by this than by the fact that she just got grifted out of ten grand. 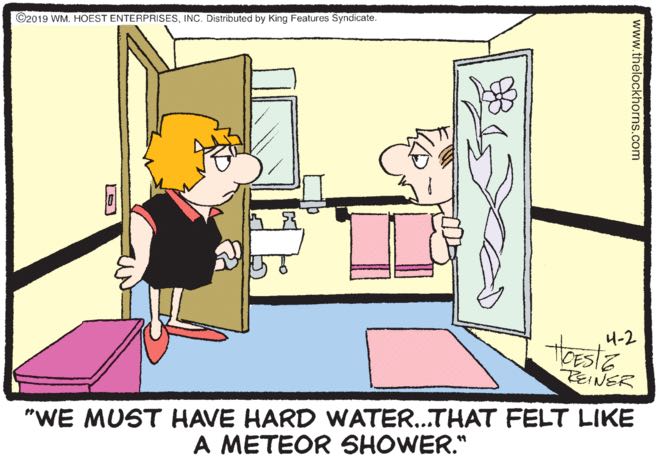 I really want the background to this little episode here, and I don’t mean “one of the Lockhorns gag writers, while standing in the shower, thought ‘Hah, what if the shower hurt, that’d be a real meteor shower, right? Does it hurt when you have hard water? I don’t know what hard water is, exactly.’” No, I’m talking about what led up to this moment within the universe of the panel. Clearly Leroy started yelling or something to get Loretta to come in. Maybe she heard his shouts of pain and thought he was finally having the heart attack that would free her from her hellish existence! But no, he’s just sticking his head out of the shower, heavy-lidded as ever, and delivering this line. Also, they’re clearly at home, given that Leroy and Loretta never seem to go on vacation, and that the decor here is very much in keeping with what I assume is their post-war Long Island suburban milieu, so it doesn’t really make much sense that he’d suddenly have something to say about the water quality now. Basically it seems like he’s put in a lot of effort into making a baffling point that’s only left everyone irritated, which is kind of the Lockhorn marriage in a nutshell when you think about it.

Even casual readers of Marvin know that the parents of the titular hell-baby don’t particularly like their son very much, for obvious reasons. But you really have to get into the everyday rhythm of the strip to appreciate how much they hate each other as well.