Sam and Silo is a strip I’ve only recently started reading and hadn’t even really heard of before that, so it’s new to me, but I always kind of assumed what we were reading were repeats — either along the lines of Crock, where the syndicate acknowledges the strip ended long ago but keeps sending out reruns to placate the trufans, or along the lines of the Family Circus or Blondie, which are ostensibly still being created anew every day but reruns keep being submitted because who cares, honestly. Today, however, I was horrified to learn that Sam and Silo is still being produced today, and that the Sam Silo creative team has thoughts on Donald Trump, and that those thoughts are that Donald Trump is horny.

Wow, congrats to “Arthur” for not just taking Estelle’s ten grand and then peacing out, but going for another payday! He’s running a Spanish Prisoner scam, with Arthur himself as the prisoner! Will Estelle fall for it? She already has her standard grocery bag ready in preparation for his arrival! That baguette and celery isn’t going to eat itself! 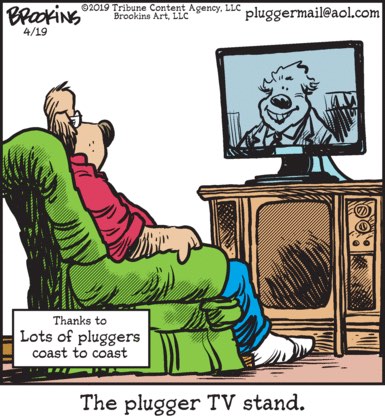 Pluggers has, in a general sense, been ripping off Jeff Foxworthy’s “You Might Be A Redneck” bit for years, but I think it’s sad to see that they’ve now succumbed to the entreaties of lots of pluggers coast to coast and have chosen to rip it off directly.