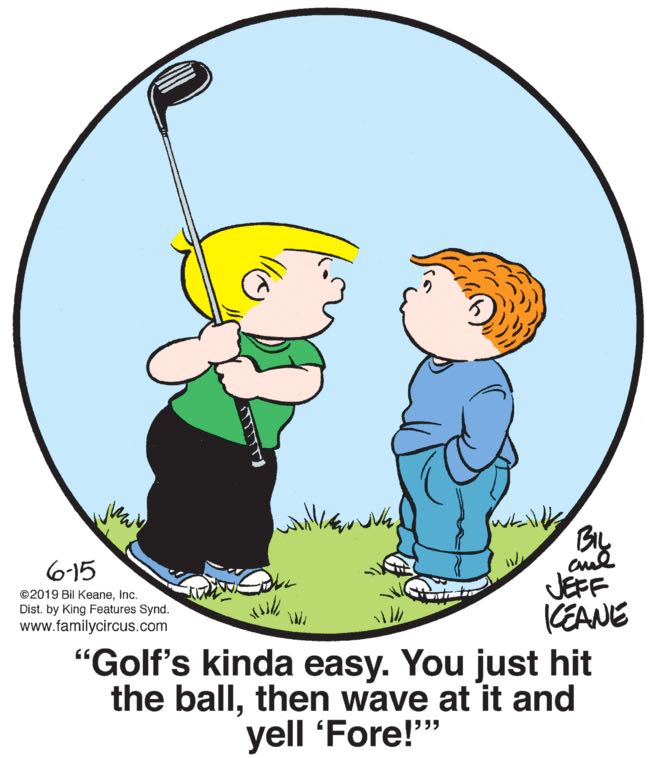 God help me, but I laughed at today’s Family Circus. Not because of the lame golf joke — it will never cease to amaze me the extent to which syndicated cartoonists think golf is a infinite supply of relatable laffs — but because of the wary way that Jeffy is eyeing the head of that club that Billy has somehow managed to get his grubby little hands on. What will he damage, or destroy, with it? Will it be one of other Keane Kids’ skulls? Jeffy is resigned to finding out, possibly the hard way.

The newspaper industry’s few remaining shreds of decency sadly precluded actually showing us Darrin and Jessica going at it once they were reunited earlier this week. But I appreciate today’s strip for letting us know, in as vivid terms as possible, how extremely gross it all was. What would a monkey do to a cupcake, exactly? I’m not sure, but we can all agree that we’re better off for not having seen it happen!

Gil Thorp spring storylines often verge dangerously into the summer months, but I certainly hope that this one, which has been pretty boring, is just going to end here. Ha ha, we spent so much time on the “too cool for school” drama that we barely noticed that the softball team won the Valley Conference, and did the baseball team even play this year? What would be extremely funny would be if the last word on all this is Mudlark #2 saying “I bet no one noticed” and then next week we just start the summer storyline and the championship is never mentioned again in any way, thus proving her point.

“Plus he’s a human being with inherent worth so, if he’s dead … someone, somewhere will be sad? I guess?”