Guys, I finally decided to dig into the deep lore to figure out what exactly the hell is going on with the new Dick Tracy plot, and I’m so glad I did, because the Dick Tracy Wiki’s Sal Monella article is truly a journey. It starts in 1998 with our man Sal creating cheap snacks out of garbage for a discount airline (with the help of his food scientist “Runs McGoo”), which gave Dick temporary amnesia, an episode that wildly I’ve had reason to discuss here before; that plot ended with Sal falling into a trash compactor and presumed dead, but in fact, in early 2004, he reappeared in the strip, now looking like this, due to the compactification process: 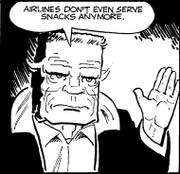 Anyway, this was the Dick Locher era of the strip, during which it had become barely concealed reactionary agitprop, so naturally Sal used his ill-gotten money to buy instruments for a band called “The Municipal Slime,” made up entirely of homeless people he hired; for their first concert he filled a stadium with garbage trucks and “the cacophonous music, foul smell, and anti-establishment nature of the event appealed to the city’s youth, and the concert sold out.” Sal now wanted to go legit as a concert promoter, but he was ambushed by Detective Frisk, who had been tracking Monella but kept his whereabouts secret from Dick and the rest of the cops because she wanted all the glory from his arrest. Frisk tried to ambush Monella at the concert; I’ll let the Dick Tracy Wiki tell the rest of the tale:

Monella was handcuffed, but his slimey hands were able to slip through the cuffs. Grabbing a gun, Monella escaped with Frisk in pursuit. Monella jumped into a passing garbage truck and Frisk followed. Additional shots were fired before the truck’s contents were dumped onto a scow on the river. The scow then dumped its load before Tracy could arrive and learn Monella and Frisk’s fate.

Anyway, I have no idea if Sal Monella is going to reappear in this storyline, but I am amused that Staton and Curtis have retconned him into just a guy with a classic mobster-lookin’ squared-off head, and not, you know, a head that was literally crushed into an unnatural cube shape by a trash compactor. I’m also amused that Dick greeted Detective Frisk, a former police officer who everyone assumed was dead, by saying “Oh, hey, we thought you were dead, by the way” and she replied, “Yeah, because I faked my death, I thought that’d be a pretty cool way to quit my job” and everyone’s just super chill about it.

At one point the whole deal with the Zits guidance counselor was that Jeremy was horny for her, but I don’t think that’s involved in this intriguing plot setup. Probably he forgot to take the right classes or is failing or there’s some other problem that’s going to jeopardize his graduation (as if this strip, in which the characters never age, was ever going to let him graduate! ha ha!) but it’d honestly be funnier if he were being very literal and it turned out he was dying or something. “Have the guidance counselor tell him,” the doctors and his family decided. “She’s got a great way with kids and he finds her so arousing that maybe it’ll soften the blow.”

Sorry, Linda, this is the CTE support group, I guess you might’ve mistaken it for the “CTE magically solving all your problems” group, jeez.