Oh, man, remember when Judge Parker Senior confessed on TV that he did a crime, and then some other mean judge — probably because judges actively breaking the law is a sore spot for him for some reason, maybe because it makes all judges look bad or maybe he just doesn’t like a two-tier justice system for the rich and poor, who can say — put Judge Parker Senior in jail? Well, it looks like our gang is about to do another crime to get Judge Parker Senior out of jail, and it is extremely key that current Judge Randy Parker not know any of the details. Definitely everything he’s heard up to this point would lead him to believe that Sam’s plan is on the up and up! He won’t be going to jail, no sir!

Nice to see that Dustin is taking a day off from its usual shtick of slamming on millennials, or even its occasional shtick of slamming on baby boomers, to cover a subject we can all enjoy: TV commercials. You ever notice how many commercials are on TV, folks? Millennials don’t, because they use their parents logins to watch Netflix and HBO Go on their laptops in their rooms, but that’s neither here nor there. 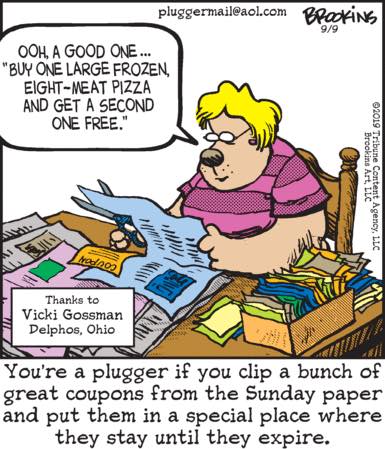 You’re a plugger if you need to hide coupons from your spouse because you know his love of terrible processed foods combined with his love of a bargain could literally kill him this week.