Wow, I guess we really are going to get “Snuffy is cruel to his family/Snuff is poor” bits for the rest of the week, huh? Personally, I’m very stuck on poor Loweezy’s face in panel two. I realize that you don’t always feel right as rain after a doctor’s visit, especially from a doctor willing to survive on Medicaid payments and barter, but I’m getting strong and disturbing “Snuffy is bribing Doc Pritchart with an extra stolen chicken in return for poisoning Snuffy’s wife” vibe from it. Think, Snuffy, think! Who’s going to make you cake now?

This is a strip that was clearly created in a white-hot fury by someone who’s just learned that schools don’t use chalkboards anymore and who was so motivated to slam on the dumb kids today that they didn’t even bother finding out what replaced them. Was it texting? Texting, probably? Anyway, in actuality they were replaced by dry-erase whiteboards, something that Dagwood would be pretty familiar with if he worked in an actual office rather than a weird vast open space with shiny floors and the occasional corner.

Much of the job of being a comics curmudgeon involves reading about unpleasant characters over and over and thinking to yourself, “But what specific kind of asshole is this?” In the case of Dustin’s dad, he’s specifically the kind of asshole who doesn’t answer this question with a perfectly reasonably “Yes, please,” or a perfectly reasonable “No, thank you,” but instead with a “Yes, but only so I can experience your culture’s inferiority first hand.” 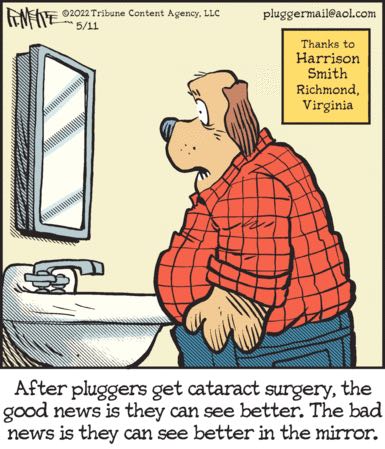 The historian Ronald Syme wrote that the Emperor Augustus, who died at 77, “outlast[ed] the friends, the enemies, and even the memory of his early days,” and I think about that a lot as I get older, about the way that, if you’re lucky enough to live to a ripe old age, you become something of an alien, as the world you grew up in recedes further and further in the past. And what do you get by way of compensation? Well, there’s more life, I suppose, which is not to be sneezed at. And old age maybe takes the edge off a bit by softening our vision and our minds, so we come to perceive the world through a comforting and gradually thickening haze. Unfortunately, modern society and so-called “advanced” medicine has allowed us to reverse this process, so that we can see, with abrupt clarity, the ruin that we have become. As usual, Pluggers, a strip I have been forced to respect more and more, has given me much to think about today.

Speaking of seeing, Nolan Ryan could see, so I don’t know what to tell you, kid. God bless Scooter for sticking up for his tragically blind friend, but as a guy who was once a loser tween who blurted out some ill-thought-out defenses of his fellow losers, I can guarantee you that he will only feel more embarrassed in the coming innings, as Valley Tech sends Greggg flailing aimlessly at bunt after bunt after bunt that he can only hear.

Dustin is a truly amazing strip, one whose whole purpose is to poke fun of the foibles of young people despite clearly having no real sense of how young people live their lives, and one of the ways this manifests, as I have frequently griped, is that the young people characters go to fern bars in order to seek out romantic entanglements, like it’s the god-damned Reagan Administration or something. I guess some garbled communication has filtered back to Dustin HQ that modern hookup culture is entirely focused on dating apps now, which could explain why this young lady is at a fern bar but also on her laptop for some reason.

I was going to make fun of Hi for seeming so shocked that Chip and his date might go dutch, but then I realized he has that same slack-jawed befuddled look in panel one as the conversation begins, too. Honestly, he looks like that a lot of the time! That Hi Flagston, just a befuddled dipshit stumbling his way through life on the funny pages! 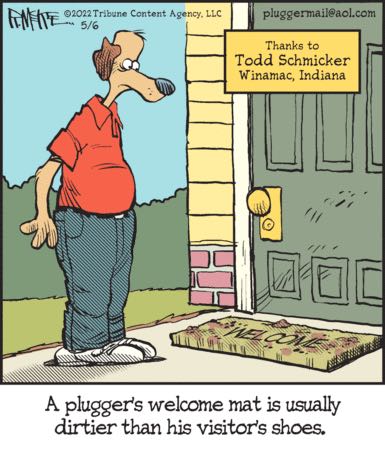 Ha ha, I absolutely love the look on that dog-man’s face. It’s gonna be real horror show in that house and this guy knows it.