Hey, Mark, I just want to point out that you’re on an expedition through the Nepalese foothills of the Himalayas, something that most people would consider the trip of a lifetime, and not only are all your expenses being taken care of but you’re earning your salary by being there. And all you have to do in return is write an article about it; if you actually do find a yeti, it will be the story of the century, of course, and if you don’t, well, there are all sorts of angles you can take about your weird trip with an obsessive, larger-than-life personality that will both entertain readers and allow you to work out any feelings you have about Dr. Camel. My point is, maybe you don’t have to act like such a giant pissy baby at all times? Just a thought.

I really feel sorry for the kids in this strip, not just because they have arrived with big, eager smiles at Career Day to learn about some potential job possibilities only to be fed a bunch of patented Slylock useless-fun-fact bullshit, but also in a larger sense because the Animal Kingdom that they inhabit seems to have an entirely pedantry-based economy, and their post-graduation career prospects are extremely gloomy, as the entire society is probably already overdue for a collapse. 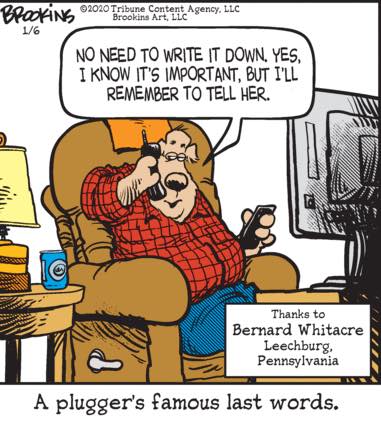 These are this plugger’s last words because he had a massive coronary later that afternoon. “Famous” is probably a strong word, but when his wife and their friend finally connected and heard about the last phone call he took, they had a good chuckle about it, anyway.