Sorry I haven’t been keeping you up to date with recent developments in Mark Trail, but they go something like this: Dr. Camel thought he heard the tell-tale whistle of a yeti and so he just bolted out of his tent into the Himalayan night, and also into what appears to be an avalanche in progress, and now Genie, his lover (?), is running after him. If Mark Trail ends up standing dispassionately over their frozen corpses tomorrow morning, snaps a picture of them for the cover of Woods and Wildlife, says to nobody in particular “I guess the yeti will just have to remain a mystery,” and then starts heading back down the mountain, I admit I will be kind of impressed.

I have now reached an age when I see incomprehensible tech jokes in legacy comics and have the nagging feeling of “are they out of touch or am I?” Like, on the surface this all makes no sense to me, but … maybe deleting pics off each others phones is how the prepubescent set flirts these days? Like it’s the equivalent of a mischievous boy dipping a little girl’s pigtails into an inkwell, except it’s up-to-date, and gender-neutral, and also causes you to lose your cherished memories? At any rate, Elmo has learned a tough lesson about regularly syncing your devices with the cloud, and Dagwood has learned that maybe he should take pictures of things sometimes, with one of these new-fangled “cameras” everyone’s talking about. 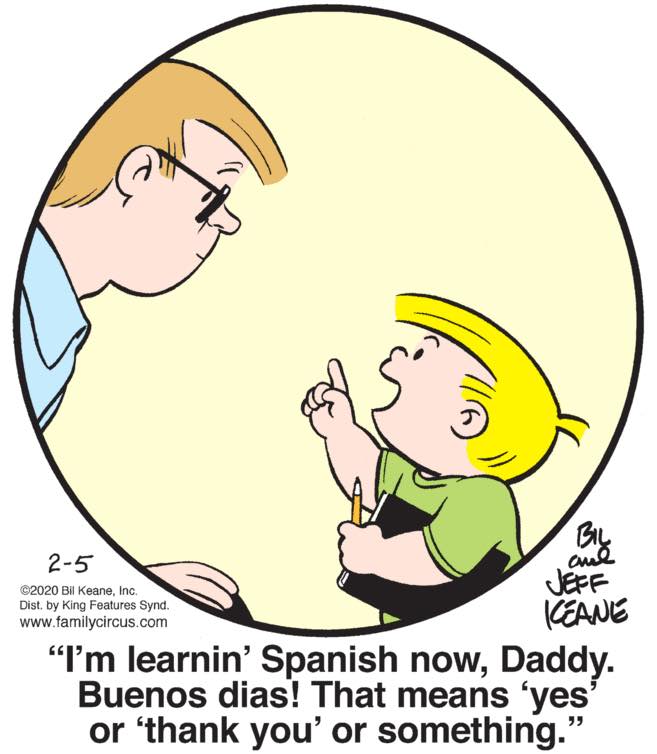 Is … is Big Daddy Keane actually smiling at his son’s ignorance? “That’s right,” he’s thinking, “this is America. No son of mine will be pressing anything but 1 for English.”