There are some days when I deliberately misconstrue the obviously intended meaning of a comic strip for comedic effect, but then there are others where I just … genuinely … don’t get the joke. Today is one of them! I don’t get the joke in Funky Winkerbean! My only clue is that every joke in Funky Winkerbean is about how we’re all dying, just some of us more quickly than others, so … maybe it’s that the Winkerbeans are too old to drink beer while watching sports anymore so now they’re drinking hot chocolate instead? Feel free to point out how I’m obviously wrong, in the comments, I’m dying to know what’s up here! 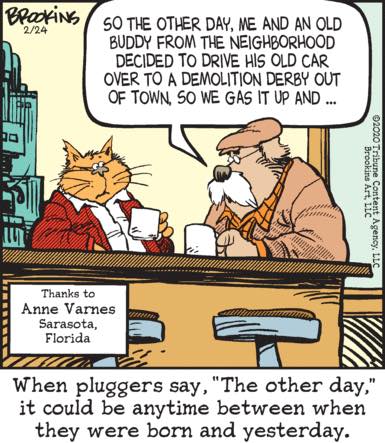 Say what you will about the art in Pluggers, but I think this drawing of the cat-plugger has nicely captured the facial expression of someone on the nonconsensual receiving end of a long, rambling anecdote who has no obvious exit strategy.

Speaking of nicely captured facial expressions, Mark is definitely wearing the frozen mask here of someone who expected to get a lot less pushback from his family about the mildly annoying guy that he left to die in the harsh Himalayan foothills. “I don’t know for sure, Cherry,” Mark says, “but he sure posted a lot on Instagram! Isn’t that the real story here?”