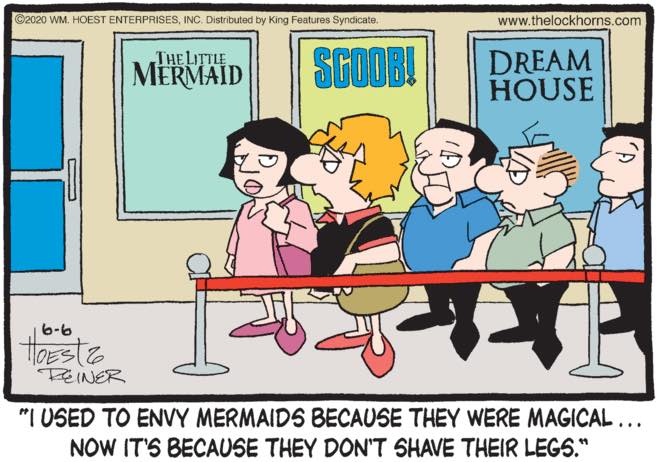 Probably most people reading this blog know that syndicated newspaper strips have to be submitted some time in advance of publication; generally the minimum is four weeks but some prefer to work months in advance. And so it can be a fun game to play: how long ago was this drawn? That especially applies in These Troubled Times, with history happening so quickly. Can you imagine that just a few short months ago, we thought that we’d be enjoying ourselves this summer by heading down to the cineplex to enjoy Scoob! (which was released straight to streaming) or the live-action Little Mermaid (the filming of which was delayed)? I guess in the Lockhornsverse, the COVID-19 pandemic never broke out, possibly because Leroy and Loretta’s powerful rage-radiation has antiviral effects that scientists don’t yet fully understand.

Longtime Funkyverse trufans know about Frankie, Darrin’s biological father, who in the original long-ago storyline had a consensual sexual relationship with Lisa that got later retconned to sexual assault. Frankie makes occasional appearances for no real obvious reason beyond causing misery, and Les seemed to think that he had come back and was stalking him, but it turns out it was [comical BOI-OI-OI-OING sound] Mason??? As yet it’s unclear whether he was trying to “go method” by observing Les in his natural habitat so he could really bring Les’s brand of depressing unpleasantness to the screen, or whether he was just planning to murder Les before Les decided to once again tank the movie project that Mason has inexplicably become extremely passionate about.