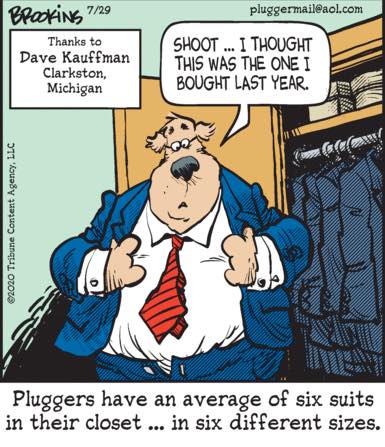 You know, sometimes I feel like you guys don’t appreciate what I go through to bring you the densely referenced metatextual content you’ve come to expect here on josh reads dot com, so I thought I’d pull back the curtain on the “process” behind this post I’m writing right now, which involved searching my archives for posts that featured Pluggers and contained the word “dying.” Was it harrowing? You bet. But it was worth it because I confirmed my hunch: as a rule a plugger only owns one suit, and his primary reason for wearing it is to go to a funeral. You can understand why he might eventually buy some more, though, what with the constant parade of death and their bodies waxing and waning with the vagaries of their medication regimen. That’s what I love about these pluggers, man: I get bigger, and they stay the same age (i.e., dead).

GET IT, REX? ARE YOU GETTING THE PICTURE? THE MEDICAL PRACTICE COMES AT A PRICE, AND IT’S A LOT MORE THAN A DOLLAR