Let me tell you all a story from the misty prehistory of this blog. When I moved in Baltimore in the now-ancient fall of 2002, the local print newspaper, to which I subscribed, still had four glorious pages of comics, including all the soap opera strips that I had heard of but never actually encountered in the wild. In Mary Worth, I arrived right in the middle of a long dinner conversation between Mary, Jeff, and Smitty Smedlap, a former chef who hated new-fangled cooking and particularly didn’t care for fish (or, as he called it, “feesh”), showing open contempt for Mary’s beloved Bum Boat. In classic soap opera strip pacing fashion, Smedlap’s monologue went on uninterrupted for days and days and I was completely fascinated by it. He was clearly an asshole, but did the other characters think he was? Were they ever going to talk and break the tension? What was going on? By the end, when Mary replied to him passive-aggressively and decided he wasn’t her kind of people, I was hooked on the strip, and on the soaps as a form, which led directly to the advent of this very website just a couple years later.

Anyway, this is a long way of saying that I am absolutely furious that we jumped directly from yesterday’s invitation to today’s aftermath and didn’t get to see Jeremy Cartwright talking shit about homemade LoFo cuisine while Mark openly seethed and Cherry, as usual, pushed all her emotions deep down inside. How boorishly ungrateful was he? Did the man insult flapjacks? Mark Trail readers want to know, damn it.

Have you ever wondered how exactly Vikings relieved themselves during the long journeys of exploration, raiding, and commerce they made in narrow, open longship? Or, perhaps more accurately, have you always kind of assumed that they just peed and pooped over the sides into the ocean, but wanted confirmation from a trained historian, or at least from a newspaper comic strip about Vikings? Well, today’s your lucky day, my friend. 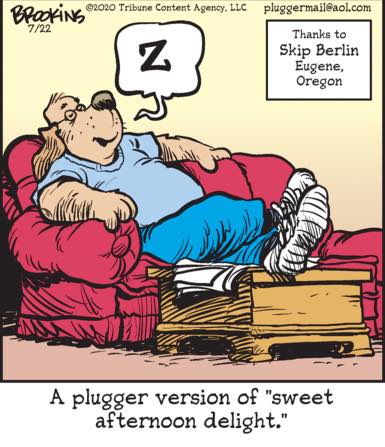