Folks, I try to keep you appraised of the deep lore of these strips, but where I fail you, my faithful commenters and your favorite guest blogger Uncle Lumpy will pick up the slack. This stern, mysterious crone who demands that Rex take a mate isn’t just any old lady; she’s Melissa Claridge, who, as Uncle Lumpy explained in a 2012 post, insisted that Rex and June couple up back in the ’70s in first iteration of this storyline in the strip, and also, uh, used to slap around her niece, I guess.

She had considerably mellowed by 2012, and had set off a wacky adventure by asking Rex and June to check in on her San Diego condo, which turned out to be full of strippers with hearts of gold. Anyway, she’s back here in her earlier guise, and if she slaps Rex into submission in order to make this love connection happen, I’m not gonna complain. 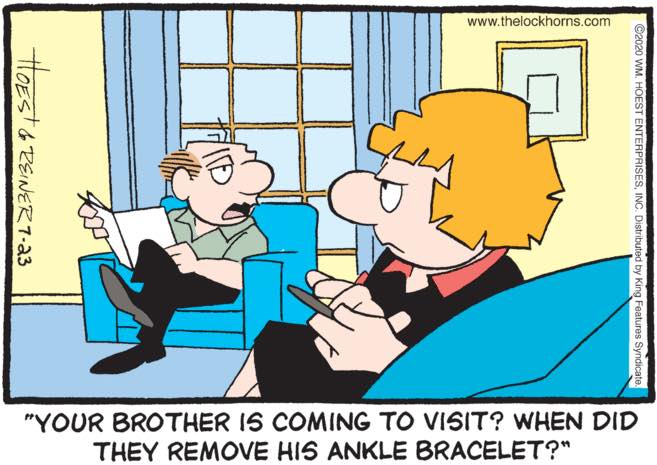 I’m sure this is just a “ha ha, Leroy hates Loretta’s family” joke, but I’m reasonably sure we’ve never heard about any of the Lockhorns’ relatives before other than Loretta’s hated mother, so another thing I wouldn’t complain about is if she really does have a brother who’s a criminal, and the focus of this strip eventually shifts from Leroy and Loretta’s petty, tiresome domestic squabbles and towards this mysterious brother’s exciting crimes.