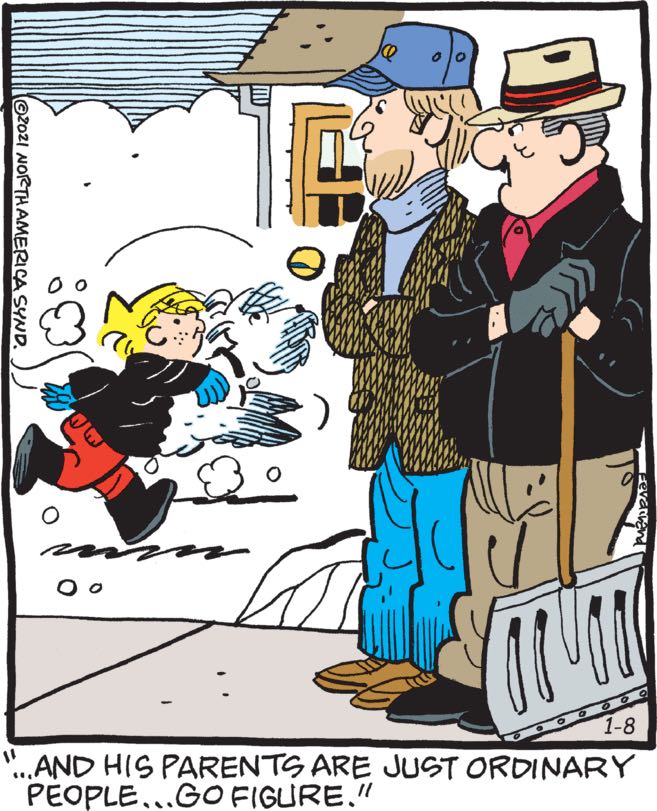 I feel like over the years Dennis the Menace has spent less time on Dennis’s actual menacing more on everyone’s second-order reactions to said menacing, or their perceptions of him as a menace, which may or may not be based in reality. Like, be honest: who’s the real menace here? The kid who’s playing fetch with his dog? Or the guy who’s buttonholed a total stranger and appears to be deep into a conversation along the lines of “You’d think with a nightmare specimen like this you’d be dealing with a deeply tainted bloodline, just generation after generation of idiots and defectives, but no! I guess it turns out that true evil can arise from the seemingly innocent! Sinister horror lurks below the surface of our every day life, and indeed inside each one of us!”

I guess maybe this joke would’ve landed better if the Miller household weren’t a largely featureless void consisting mostly of a blue rug and a enormous expanse of white wall. But even so, it’s still a little off! Marvin refused to sit in the corner, so here he is sitting … not in the corner, ha ha? It’s like someone’s been told that they can’t do poop jokes anymore, and so they’re trying to reason out what other kinds of jokes might look like from first principles, and this was their first stab at it.

We saw a glimpse of the exterior of Chez Winkerbean in a strip just before Christmas, and I was too busy focusing on the negative to take note of the frankly enormous house that Funky and Holly live in. This is curious, considering that their income derives from managing a perpetually failing small-town pizza parlor for its fickle absentee owner, and not long ago Funky sunk his savings into a failed attempt to franchise Montoni’s shitty pizza in New York City, a metropolis noted for its pizza-snobbery. Admittedly, the real estate market in Northeastern Ohio is not exactly booming, so maybe my radar on what a 5,000-square-foot suburban McMansion would go for is off, but today we learn that the Winkerbean family has the means to drop on the order of four grand on a TV without that even being noteworthy enough for Funky to remember. What I’m trying to say here is that managing a perpetually failing small-town pizza parlor may actually be actually pretty lucrative, in the sense that it makes a great front for money laundering for organized crime.