I guess the point of this strip is that each of these characters is responding to the question of what to get Sarge for his birthday in his own way, according to his own character (in Beetle Bailey, “character” means “whatever dumb on-the-nose collection of tics and running gags they’ve accrued over the years”). So, Plato wants to give him a book, because he’s a nerd; Killer wants to give him a box of candy, because he’s so monomaniacally focused on getting laid that his only context for gift-giving is the cliches of heterosexual courtship; Zero wants to to give him a comic book, because he’s dumb (?); and Rocky wants to give him a music mix, because he’s named “Rocky” due to the fact that when he was introduced into the strip, his one-note character was focused on liking rock ‘n’ roll music, which was as novel then as omnipresent personal computers were when Specialist Chip Gizmo was introduced in the early ’00s, because that’s just how long Beetle Bailey has been around. Anyway, I wanted to point out that all of these people are giving Sarge something they’d like, not something that he would actually want to receive. Can you visualize Sarge reading a book? Of course not. Only Beetle’s proposal is actually thoughtful. Sadly, it will not be appreciated.

After kicking off his life as a diagnosed diabetic with one last indulgent fast-food meal, Buck’s blood sugar numbers got real bad, but then he came home and exercised, and they got OK again! Is this … how diabetes works? I don’t know much about it but I do know that Rex Morgan, M.D., is a rigorously fact-checked comic that aims primarily to spread accurate medical information, so I’m just going to assume that this is, in fact, how diabetes works. Good job, Buck! Looks like you’re on your way to a healthy lifesty[finally gets to narration box at bottom of second panel] OH NO 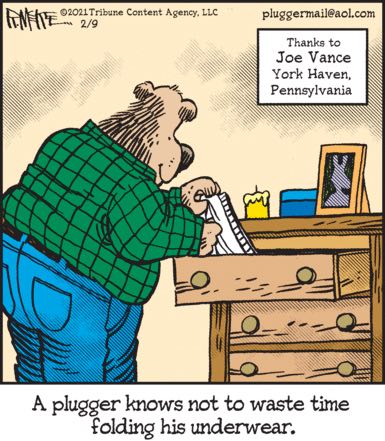 I mean, duh, of course he’s not going to fold up his underwear. The wrinkle lines are a further turn-on for fans of the sick sex thing that Pluggers, in one of 2021’s biggest surprises, has become.