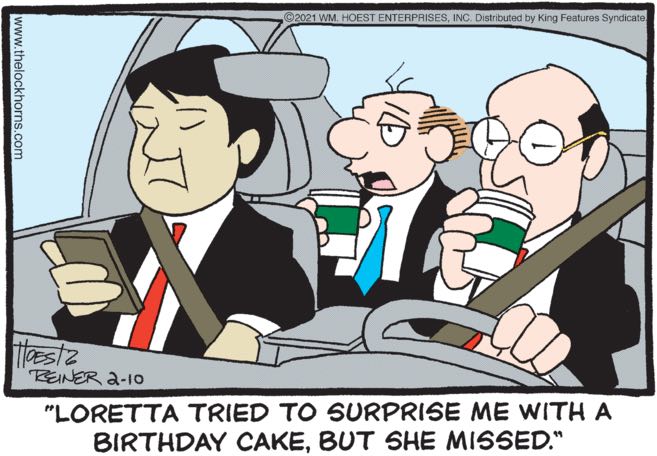 Leroy has traditionally commuted to work by train, but it looks like he’s managed to make friends the acquaintance of some coworkers and weaseled his way into a carpool. I guess he thought that, unlike his experience on public transit, in a carpool he’d get a response when just threw out some unprompted ruminations about how depressing his marriage/life is? Based on how studiously that guy is looking at his phone, I’m going to have to say he’s wrong on that point.

What really makes this strip for me is that Goldie does in fact look extremely depressed. This isn’t a typical joke about a little kid’s boundless empathy overestimating an animal’s unhappiness; nope, Trixie is like “wow, our goldfish never gets to go anywhere!” and the goldfish’s face absolutely confirms that it’s stuck in a hell-prison and hates every minute of it.

I’m not sure what about Jughaid’s statement reflects more misplaced optimism: that he thinks Hootin’ Holler’s economy will improve in the next eight years to the extent that it will be able support a movie theater, that the movie theater business will even still be around in eight years, or that, as someone living in an impoverished community where malnutrition and clan violence are endemic, he’ll survive to adulthood.