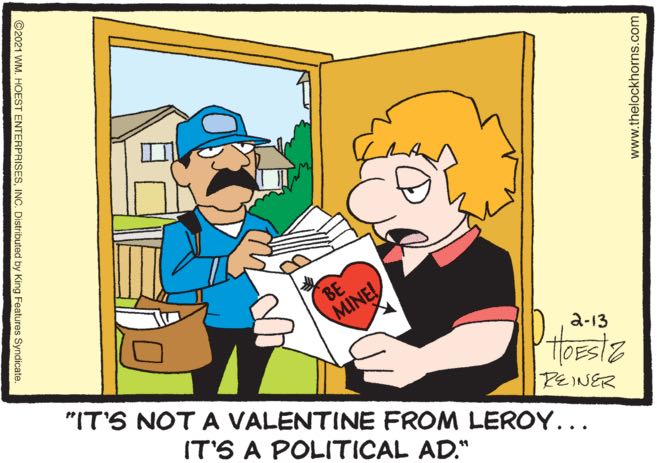 Based on their relatively modest tract home and Leroy’s rail commute and his Jets and Mets fandom, I’ve long assumed that the Lockhorns was an inhabitant of Long Island. However, today’s panel makes me think that perhaps they actually live in the part of New Jersey just across the river from Manhattan, as the Garden State is one of the few that have statewide elections in odd-numbered years; they could also live in New York City itself, which is gearing up for a mayoral campaign this year, although their suburban lifestyle woud only make this likely if they lived on Staten Island or maybe in outermost Queens. Anyway, the best thing going on here is that Loretta has made the mailman stand in the doorway while she assesses her mail in terms of what it means for her marriage, and his numb, resigned facial expression tells us that this is definitely not the first time this has happened.

“What do you think the answer to that question is?” is a stereotypical bit of therapist-speak because much of the point of talk therapy is to get the patient to really self-reflect and understand their own mind and emotional state. I feel like when you’re a nutritionist, though, your job is really to just deliver straightforward information about what patients should and shouldn’t do? Just tell him not to eat an entire 1,600 calorie fast food meal in one sitting, lady! That’s what he’s paying you for!