Oh, it turns out that this strip was setting up a Christopher Nolan-style chronologically disjointed narrative in this week’s Crankshaft, where each strip pushes back further into the past to peel open another layer of the story. How do I feel about this bold storytelling experiment, you may ask? Well, it’s ending (beginning?) with Crankshaft in significant physical pain, so I’m feeling pretty good about it, actually.

The finally-wrapped-up initial New Model Mark Trail storyline established that there are multiple generations of Mark Trials (Marks Trail?), which I guess raises the question of which of the strip’s adventures had which generation Trail as the protagonist? Well, it turns out the rerun we got right before the reboot, where Mark refused to attend an industry awards ceremony to tend to his sick dog but ended up winning anyway, was totally this guy. Maybe if he had shown up in person he would’ve gotten the real award, crafted from the finest pewter crystal, rather than the cheap lightweight glass version they sent him to save on shipping costs. 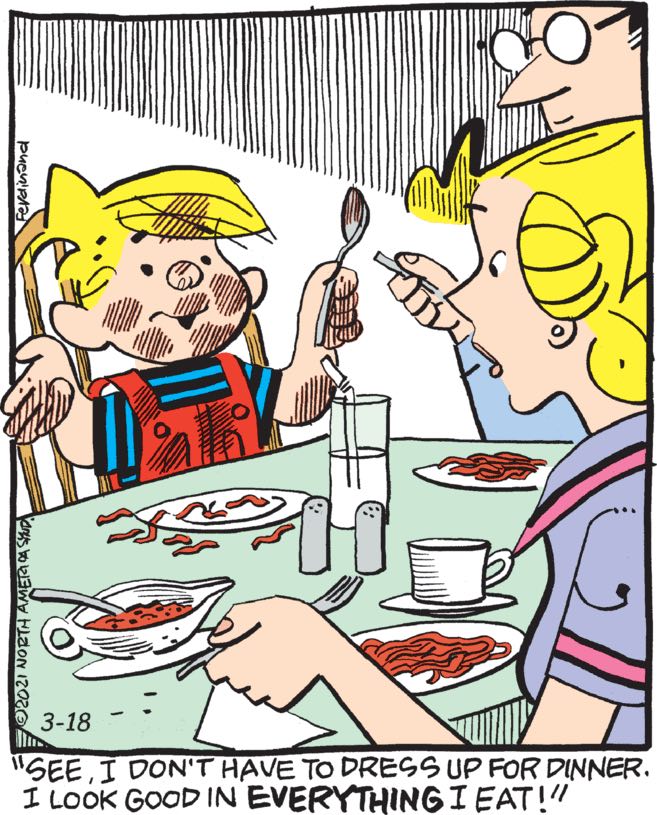 The true menace here is that, no doubt by some combination of threats and endless whining, Dennis has convinced his parents to serve bloody, raw hamburger for dinner tonight. What’s the matter, Henry and Alice? Not hungry? You’ve barely touched your plates!