I am at this point very obviously committed to my specific bit, which is that I comment on every day’s comics right after I read them, having no idea what the future holds for that strip, in order to replicate this website’s origin story, which is that I would make jokes about the comics to my wife every morning over breakfast until she told me to make a blog about it. But sometimes doing things that way means I miss slow-burn developments in the comics. Like, take for instance, Gasoline Alley. Today’s strip involves a man returning a pair of glasses to a woman after they accidentally fell into his shopping basket at the supermarket. Ah, you’re probably thinking, this is the beginning of a romantic meet-cute! In fact, this is latest “twist” in grueling storyline about this lady losing her glasses while shopping that’s been going on for three weeks, and in a sense I’m sorry I haven’t been bringing it to you blow by wildly undramatic blow. Go back and read the last month or so, if you think your heart can handle it!

Wow, looks like Rex is going to have to add another entry to his list of “Seemingly anodyne phrases meant that are meant just to fill time but actually end up unpleasantly extending a conversation.” This one is going to result in him having to talk to a second person, so it gets a little red star next to it. 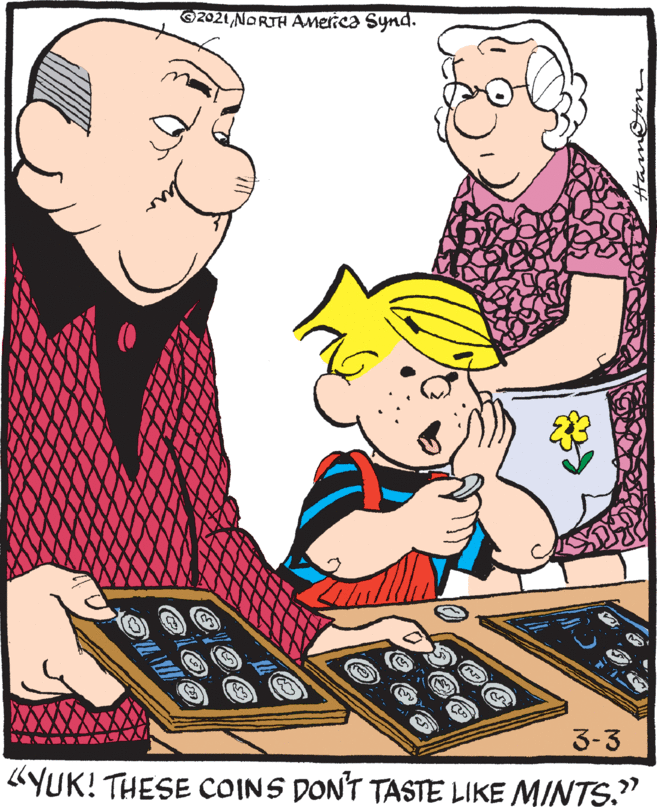 I’m a big fan of Mr. Wilson’s completely gobsmacked facial expression here. “Did he just try to eat that coin? Is he that stupid? Is my nemesis that stupid? And what does that say about me?”

Les isn’t just history’s greatest caregiver; he also watches sports in the correct way, for virtuous reasons, unlike you, you filthy, depraved animal.