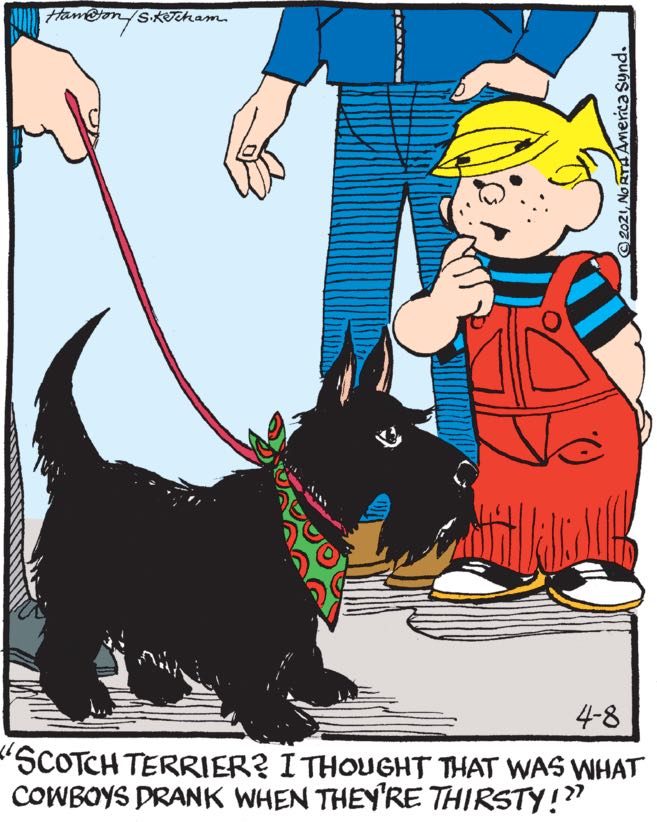 I’ve always thought Dennis’s affinity for Westerns, a genre very popular among children when this strip began and almost unknown to children today, says a lot about the suffocating layer of nostalgia piled atop this strip. However, today we get an intriguing hint that Dennis is actually watching revisionist neo-Westerns that try to grapple with the real social and historical backgrounds behind the myths, and whose heroes, turning to liquor in a futile attempt to numb the loneliness of the open range and the trauma of living in a violent frontier society, end up suffering from alcohol-induced psychosis — or, in cowboy patois, “scotch terrors.”

If DithersCo employs a full-time vending machine stocker rather than just hiring a service that stocks the machines for multiple businesses in the area like everyone else does, maybe Mr. Dithers ought to spend less time micromanaging Dagwood while he’s at work and more time thinking about some of their structural staffing costs. On the other hand, this arrangment may have arisen because there’s a single employee who’s responsible for the company’s unusually intense vending machine use, and replacing him with someone of similar talents but a lesser appetite will produce some real benefits for DithersCo’s bottom line.

Say what you will about Dick Tracy, but if you want to see a guy in a suit stabbing a hippie in major newspapers, this comic strip is your only option.