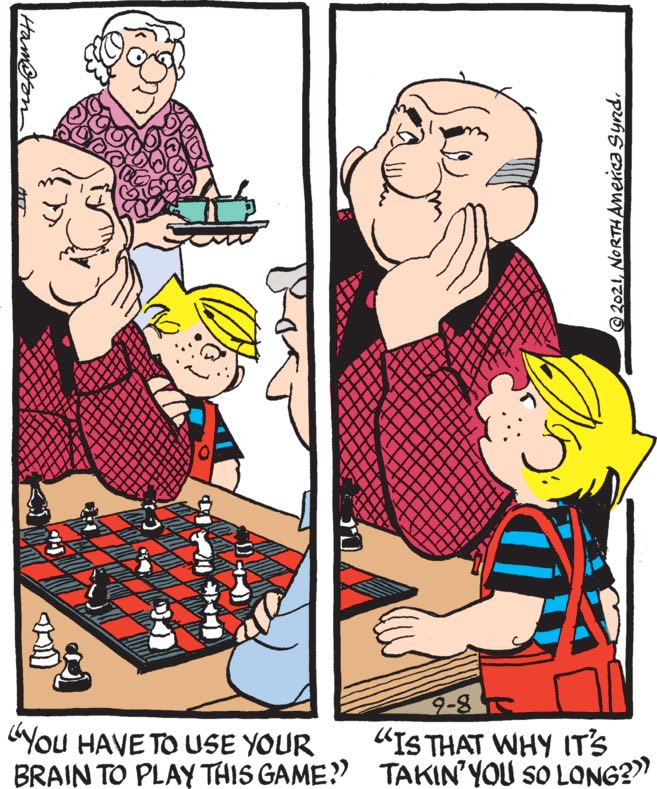 We all know, of course, that every time the Henry and Alice Mitchell attempt to make friends, their very first social engagement ends in disaster when Dennis says the darndest/most insulting thing in front of them. Mr. and Mrs. Wilson, on the other hand, don’t have any friends, which I’ve always assumed is the reason why they allow Dennis to come over to their house all the time, because the irritation he causes Mr. Wilson is a welcome distraction from the irritation they cause one another. Anyway, George has apparently browbeat some acquaintance, maybe just some guy he played chess with in the park once, into coming over to his house, and Martha has been nice enough to prepare some coffee, but here comes Dennis to ruin everything, just like he does with his parents. I’m beginning to suspect that he acts out just so that he can be center of attention at all times and nobody makes non-menacing acquaintances????

Sadly, it’s not a violation of the Uniform Code of Military Justice for a general officer to attempt to “build buzz” to create a cult of personality around himself and/or “go viral.” A real oversight, in my opinion!

“Stealing the Time Drone won’t be easy. Dick Tracy’s a close friend of Diet Smith. He always shows up when Smith’s tech is threatened. Plus the Time Drone itself provides its owner with near-omniscience, allowing anyone to see plots unfolding in the past! Diet and Dick are probably watching us right now, from the future!” SORRY I KEEP HARPING ON THIS EVERYBODY BUT IT’S TRUE, I WILL NOT BE SILENCED ON THIS POINT!!!! [flips the bird at Diet Smith, who I assume is watching me type this in the future]