“Bonjour, mes amis! Eet ees I, Pierre, narrating my new life with zees Weelbur character! Many Americans like to make big jokes about zee French and our military — how-you-say — misadventures in zee first half of zee 20th century! But let it not be said that we have not learned from our errors! For instance: keeping our army behind zee Maginot Line, waiting for zee Boche to attack? A foolish notion, as it turned out! That is why I am responding to zees one’s threatened aggression weeth a pre-emptive attack! Take zat, you terrible shoes! Trust me, Weelbur, once you get over your anger, you will thank me when you upgrade to something much more fashionable! And zat is how we shall eventually become friends, just like zee French and zee Boche today.”

I hate to be the guy pining for the long-lost past of comic strips. I’m not even going to demand a return to the Blondie of the 1930s, which featured delightfully detailed drawings of Blondie’s roommate being stood up at the altar by an ether-crazed Dagwood. I just want someone at this strip to go back to thinking up fun names for its off-screen characters, and knock it off with the incredibly on-the-nose ones. It’s a contract, which is about money, so I guess the person or company they’re signing the contract with is named … Moolah? We don’t need this brand of comics onomastics, Blondie, we already have Beetle Bailey! 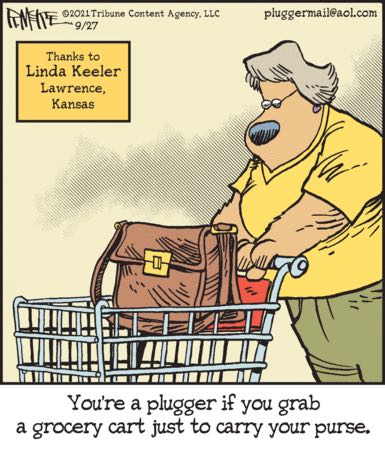 I am definitely assuming this plugger is using a grocery cart to push her giant purse around her own home. Not going to do any further research on this one!