Happy New Year, all, I am getting back in the saddle after my long winter’s nap and as usual am beginning the year by just straight-up flinging a bunch of comics at you from the time I was gone! I cannot keep away from the siren song of the continuity and continuity-ish strips so brace yourself for a wild sleigh ride of horror!

Aww, isn’t that sweet? Dick Tracy’s beloved half-alien granddaughter is “sure” Ugly Crystal is pretty “in her own way.” What a kind thing to say that isn’t back-handed and passive-aggressive at all! Well, Merry Christmas! [hears “happy holidays” in response] HAPPY WHAT? GO TO HELL YOU BLUE HAIRED FREAK

When we last saw our heroes, they were about to reveal why Gary’s sister shouldn’t feel bad for him even though he was bankrupt and had his law license suspended. Turns out it’s because … he’s sleeping on a friend’s couch! Ha ha, that does make him unsympathetic! I had actually assumed he was living with his family? Anyway, he’s also trying to groom Rick Soto as a boy band singer or whatever, which was his last hope before he falls away into the financial abyss. Not sure how Gil figured all this out, including his living situation, from Kelly’s Internet ninja-ing, but no matter, Gary’s definitely going to lose everything now, just like he deserves for being a nerd who hates football! 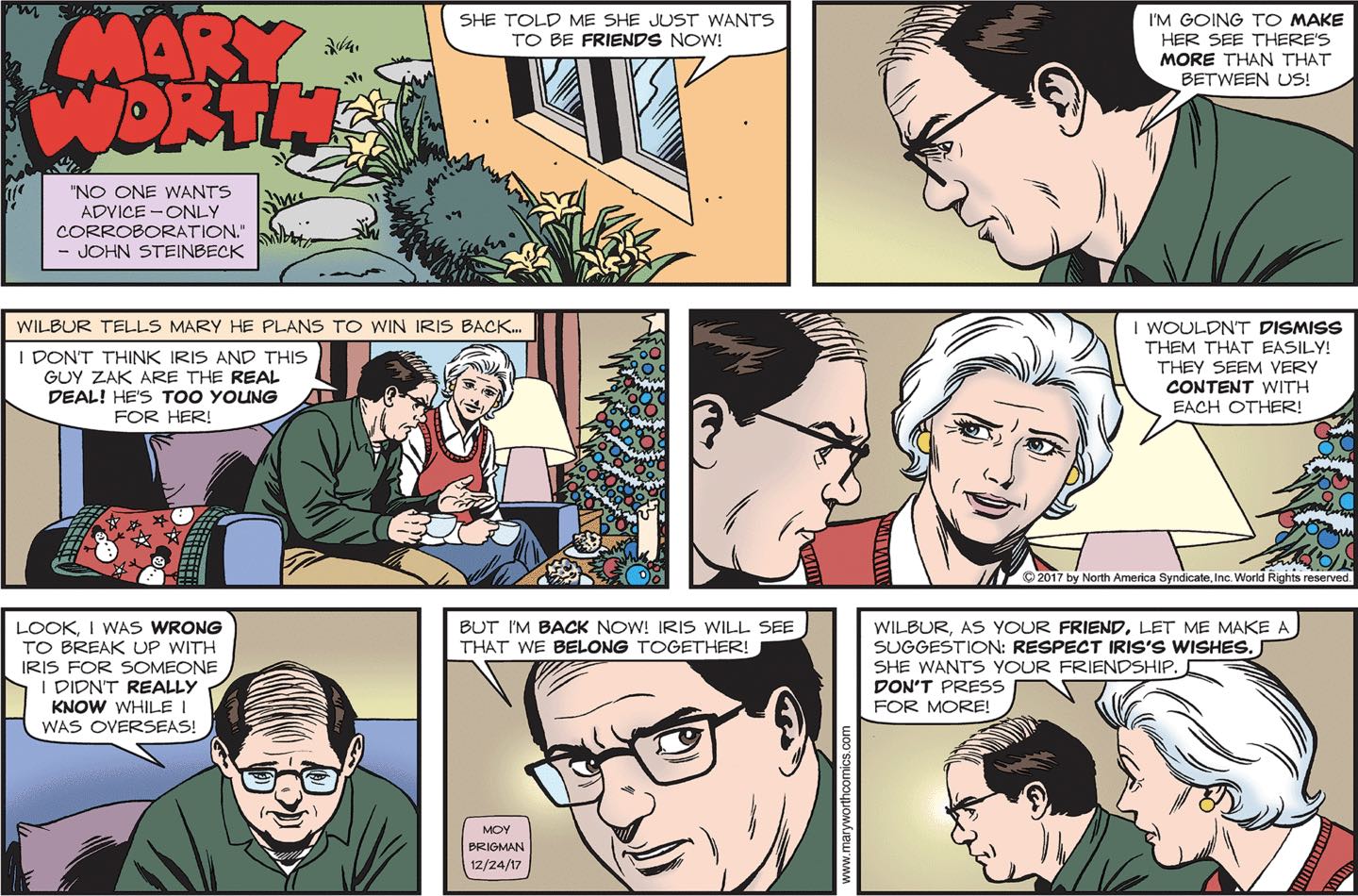 Meanwhile, in Mary Worth, Wilbur is so crazed with jealousy that he can’t even hear Mary’s extremely sensible advice! But, as the great John Steinbeck pointed out, most people don’t listen to advice. Ha ha, Mary, John Steinbeck basically says your whole deal is pointless! He’s a Nobel laureate, so he probably knows what he’s talking about.

One of my favorite things about Christmas in the comics is how some of the soap strips just grind to a halt to bring a little moment of Christmas cheer. Like, Mary obviously isn’t dwelling on Wilbur’s sullen rejection of her stern warning to leave Iris alone, because she’s too busy serving up an enormous ham that she and Dr. Jeff and going to eat apparently by themselves, just looking at each other lovingly while the ham juice dribbles down their chins. I’m pretty sure we haven’t actually seen Dr. Jeff in “action” in this strip since last Christmas, when he was similarly besotted with a ham. Good to know he’s still alive, I guess, although his lack of dialogue in both Christmas strips leaves open the possibility that we’re dealing with a Weekend at Bernie’s or Lars and the Real Girl situation here.

Meanwhile, Gil Thorp can only spare a single panel for holiday greetings, because it needs to use the other one to set up an exciting cliffhanger! Who has been lurking just outside Gil’s office, ready to say that Rick’s own mother’s opinion doesn’t matter?

Why, it’s Rick’s dad, of course, who’s come home from Dubai to clean house and reclaim his wife and son from the clutches of his nefarious brother-in-law. All’s well that ends well, and our only question is: did Gil know Richard was listening from the hallway this whole time? Did they plan the whole thing out in advance, maybe by drawing X’s and O’s on a chalkboard?

Mark Trail’s Christmas week storyline is more chill by an order of magnitude. Look, everyone, it’s Andy the dog! He’s clever and alert … and he smells something.

OK, I know technically Shoe isn’t a continuity strip, but I do think you all need to know that, according to the inscrutable but implacable commands of a soulless computer, the Perfesser is going to have to have sexual relations with a major kitchen appliance.

So, yeah, it turns out the old people lurking around the playground were in fact little Johnny’s biological paternal grandparents, whom Margie claimed didn’t exist because Johnny’s dad lied to her or maybe she just didn’t like them, who’s to say. Anyway, June understands why this kindly old couple would desperately want a connection to their lost son, but, like, she’s had this kid around the house for several weeks now and has kind of gotten used to him, you know?

So, Wilbur’s had a few days to let Mary’s advice that he should let Zak and Iris be happy together sink in, let’s see how he’s dealing wOH MY GOD HE’S GOING TO AMBUSH HER WITH FLOWERS IN THE PARKING LOT WHEN SHE AND ZAK ARE ALL DRESSED UP TO GO TO A WEDDING, THIS IS FANTASTIC

AH HA HA NO WAIT HE’S NOT EVEN GOING TO GIVE HER THE FLOWERS, HE’S JUST GOING TO STAND THERE BUG-EYED AND PARALYZED BY THE SHEER POWER OF ZAK AND IRIS’S RAW MUTUAL SEXUAL ATTRACTION

Oh, man, he even gets to see the moment where they profess their love for one another for the first time in English. You can grip those thorny roses as much as you want, Wilbur, but no mere physical pain will distract you from your broken heart!

Ha ha, I may have implied up above that notorious fascist Dick Tracy and his strip don’t take kindly to ecumenical “Happy Holidays” bullshit, but that’s obviously not true, because here’s beloved ancillary character Sam Catchem lighting the menorah a mere eleven days after Hanukkah ended!

Anyway, it turns out that Andy was sniffing out a raccoon that was raiding the Trail family trash. Good ol’ Andy, always watching out for his family! Other families, like the family of this adorable baby raccoon, can go fuck themselves. 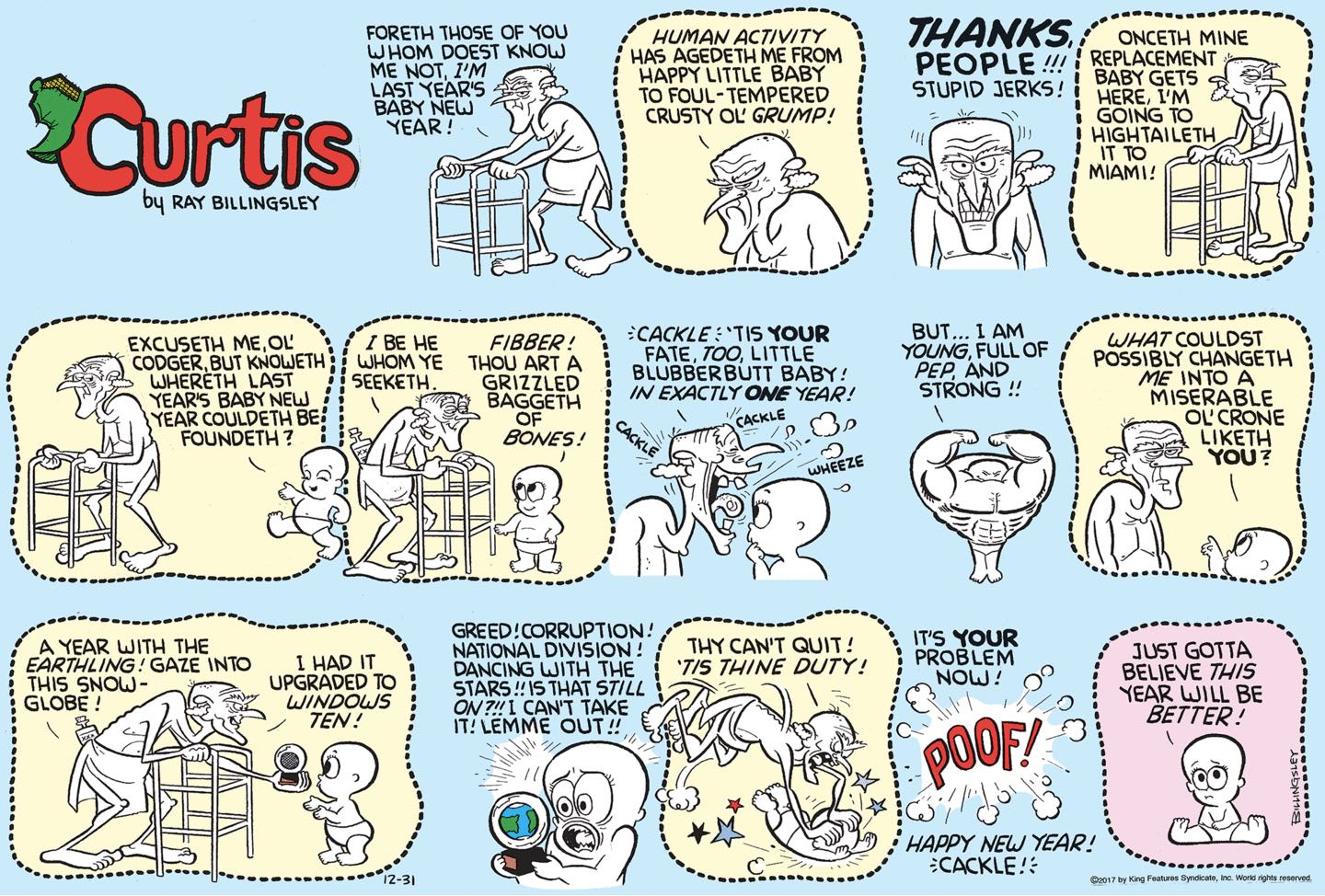 Curtis seems to have forever given up on wacky Kwanzaa stories, but at least we got this charming strip, featuring a delightfully cackling old man 2017 and a briefly muscular baby 2018.

Now we’re rolling into 2018 and … hey guys, remember football? Remember the big win the Mudlarks had on the road against their conference rival? Well, no, you don’t, because you never got to see it, but at least you got to see Gil and Kaz aggressively high-fiving about it after the fact, and also gloat about how Uncle Gary is sleeping in the gutter tonight, probably!

Oh, and you’re probably wondering: what’s the new year have in store for the Funkyverse? Well, probably Funky spiraling back down into alcoholism because the world is just too messed up right now and doesn’t a nice big bottle or twelve of whiskey sound great?

Anyway, my 2018 is going to include a normal, healthy amount of booze drinking and another year of making fun of the comics, just like always, so I hope you’ll stick with me and tell all your friends! 2018 is also going to feature me hosting my extremely fun and hilarious show, The Internet Read Aloud, every first Friday of the month in Los Angeles, except in February, I’m gonna be out of town in February, but including January, and that’s this Friday and here’s the poster! 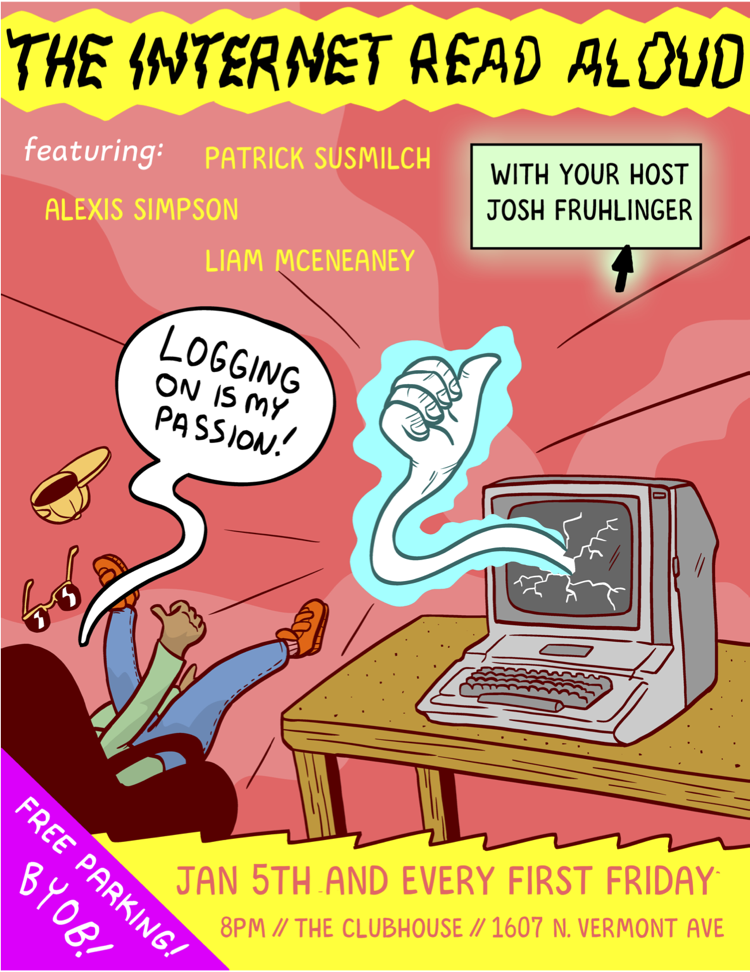 Here’s the Facebook event! Let’s all have a fun new year together, guys!