“Ah, mes amis! I realize I have not been keeping you up to date about my adventures with Weelbur. Je suis désolé! You see, what happened is, he has taken me out of his terrible apartment and unclipped me from the leash, and then I said au revoir forever! I shall ‘peace out,’ as you Americans say!”

You know, one of my main philosophical beefs with religions that propose an afterlife of eternal rewards and/or punishments is the disproportionality of it all. Like, what could we possibly do in our finite life on Earth that would merit an eternity in heaven, or hell? Your soul in either place could exist for a billion years, so that your entire mortal life would basically be a long-forgotten blink of an eye, and that still would only be an infinitesimal fraction of what you have ahead of you. Can you imagine an angry Dawg confronting a baffled God, demanding to know why he only got 12 or so years on Earth, when soon everyone he ever loved would be joining him in heaven, and they’ll be happy together forever, as transcendent beings. Unless … the Flagstons are going to hell? They’re bad people, they’re going to hell, and Dawg, who lives with them and knows them intimately, is well aware that his few years on this plane are the only ones he’ll ever spend with them, as they’ll all be tortured for all eternity, for their sins? I realize this has gotten pretty heavy, but if Hi and Lois didn’t want me going down this road, it probably shouldn’t have done a comic where a little girl and a dog contemplate mortality.

The thing I appreciate about today’s Dustin is that Dustin’s dad is still wearing his suit, which means that he spent his evening commute seething in a white-hot rage, confident that when got home he would find that Dustin had once again failed to get a job or do anything productive, and worked himself up into a frenzy so intense that he had to find his no-good son and yell at him immediately upon arriving at the house, without even pausing to take off his tie. It’s funny because his whole life is nothing but a series of disappointments!

Having complimented Blondie’s punchline yesterday, I now feel like I have credibility to point out that today’s absolutely sucks ass. Establishing a whole German backstory for Lou (“Ludwig,” I guess?) just to deliver a gag about an oompah band playing a song not associated with oompah music and also see Dagwood get a pile of goo to eat, which despite his ravenous appetite seems very much not his bag? Terrible, terrible all around. Sad to see the strip blow its entire week’s supply of humor in a single day. 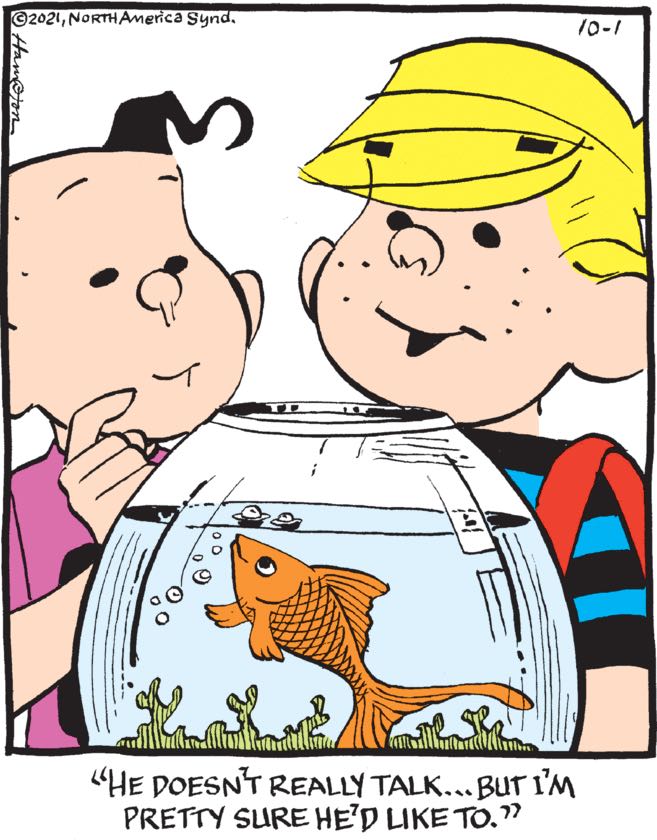 “I’m sure he’d like to. But he can’t! He can’t communicate with anyone! He’s screaming endlessly, in his own mind!” Menace level: very high.