I’m reasonably sure that if a soldier were running away from his commanding officer, who intended to brutally beat him, and was live-streaming the whole thing, that is the sort of thing that would go viral! Probably, uh, not in a fun way, though.

Wow, looks like Wilbur’s going to upgrade, lady-wise! When confronted with an ill-behaving pet, his ex was all like “Let’s talk about everybody’s feelings,” blah blah blah. But Carol offers sensible and concrete solutions, like “maybe don’t leave things out where your dog can chew on them” or “what do you mean you didn’t buy a chew toy for your dog, you utter dolt.” I think they’re gonna get along just fine! 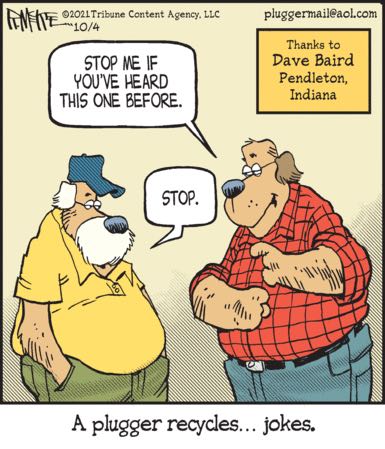 Everything else, though? Goes right into the landfill, even if it’s recyclable. Sometimes it doesn’t even make it into the trashcan. A lot of times pluggers just throw stuff out the window of their moving car!