Folks, for a long time I’ve been trying to ignore the fact that there’s a movie coming out called Gasoline Alley. As near as I can tell, it has literally zero connection to the comic strip, as its Wikipedia entry informs me its tagline is “Justice Gets Dirty” and it stars Bruce Willis as “Freeman,” Luke Wilson “Vargas,” and “Devon Sawa” as “Jimmy Jayne,” none of that tracking to our beloved comic strip, which is about [thinks long and hard about what you might describe Gasoline Alley, the comic strip, as being “about”] scrapbooking. Anyhoo, I don’t have the energy to do any research on copyright law, but since Gasoline Alley is 103 years old, I’m going to guess that the title, at least, is now in the public domain, and so all the strip can do in revenge for a movie with the lesser-known Wilson brother and “Devon Sawa” in it stealing its name is put out a long, rambling shaggy dog plot involving these two Hollywood producers that will ultimately go absolutely nowhere.

I honestly couldn’t tell you what Mother Goose and Grimm is “about” either, but up until today I would’ve been very sure that what it wasn’t about was the seething, unrequited lust its elderly bird-person characters had for one another. You learn something new every day, in the funny pages!

One of the great mysteries of Snuffy Smith: how old is Snuffy Smith, exactly? On the one hand, he and Loweezy are young enough to have an infant son; on the other, as we learned today, Snuffy is entirely toothless. I guess it’s possible that, at some point when Snuffy was in his late 20s or early 30s, Doc Pritchart found a rotten tooth or two and decided just to pull them all to “get ahead of the game.” 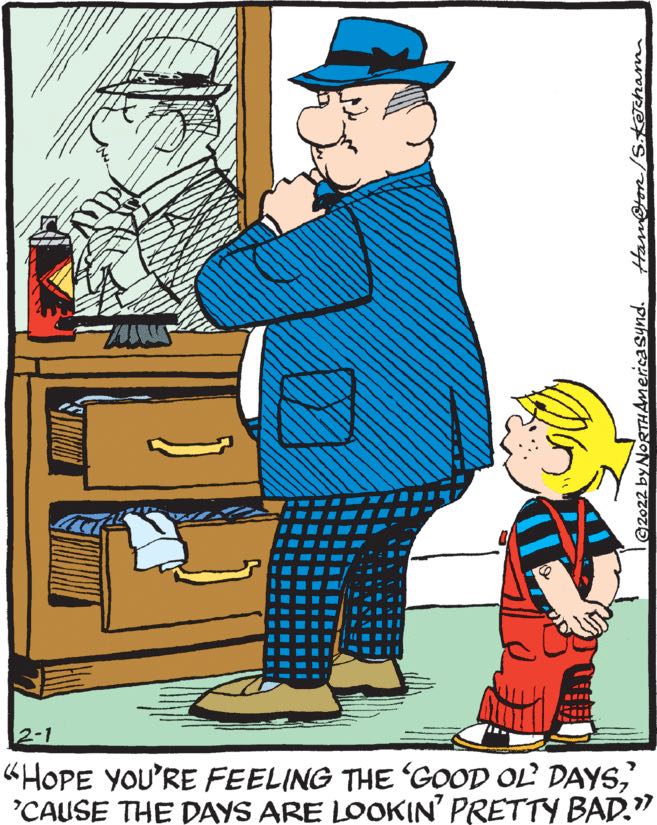 “We live in a degraded, fallen world, Mr. Wilson! Don’t bother getting dressed up for it, they’re just going to put you on TikTok and then do a cancel culture on ya.”