This strip has made a genuine attempt to plaster the Postal Service’s current stylized eagle head logo on everyone’s uniforms and various other surfaces, although the effect is somewhat ruined by the colorist’s choice to make it bright yellow — did they think it was a metal buckle or something? Anyway, I don’t know if it’s meant to be just off-model enough so as not to infringe on trademarks, or if the colorist error has botched a genuine symbol of partnership between the Postal Service and the Blondie creative team, but either way I very much would like to see Dagwood and his damn sandwiches wiped out forever by a drone-fired missile, thanks.

OK, so, technically NYC & Company is “New York City’s official marketing, tourism and partnership organization” rather than a government agency per se, but its spending still ought to be scrutinized, and I for one very much doubt that paying King Features to have Mary Worth and a neglected psychic child tour New York’s best known museums will really see a solid return on investment.

Reading this, at first I was like, “Ugh, I certainly hope the future children of today’s children aren’t still using jpeg files when they grow up,” but the file format is already more than 20 years old, so who knows, really? But you and I both know that neither “Mrs. Lopez” nor the actual Gasoline Alley creative team knows what exactly a jpeg is, and we should all brace ourselves for days — maybe weeks? — of this strip explaining why computers are bad and today’s students need to learn valuable scrapbooking skills in order to compete in the modern economy.

Oh, hey, I hadn’t really noticed this before, but I guess … Christmastime is the season for intra-Funkyverse crossovers? Like last year, when the Funky Winkerbean crew reflected fondly about how Crankshaft is a monstrous dick to children, or the year before, when he caught sight of the vegetative husk that is his Funky Winkerbean-era future? A holiday bowling tournament seems to have less opportunity for grimness, but, you know, never count these strips out in that regard. They’ll find a way. Oh, yes, they’ll find a way. 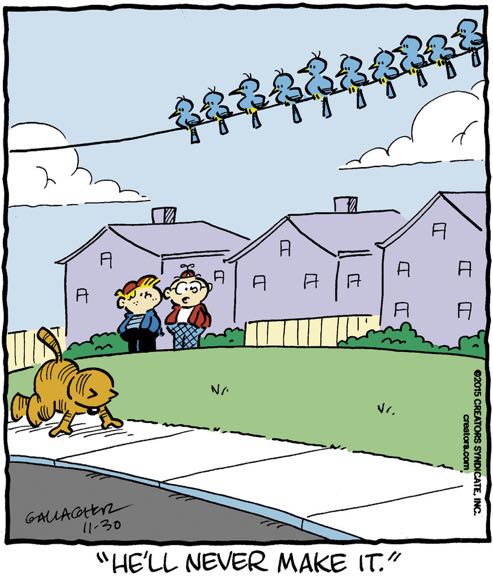 In a desperate attempt to one-up a certain other orange comics cat that thinks he has a monopoly on unpleasant Mondays, Heathcliff is about to embark on a futile attempt to outrun a pelting rain of bird shit.