I honestly kind of respect how Blondie is just absolutely committed to doing jokes about whatever big pan-cultural event is on the calendar, and in a way that doesn’t engage with the specifics of said event at all, instead just acknowledging that it exists at an extremely surface level, so that the jokes could theoretically be reused for years to come (though amazingly I’m pretty sure they never are). The cultural net is pretty wide, too, and I’m not sure if that’s meant to make sure that there’s a little something for all the Blondie-heads — “the folks who weren’t into our generic March Madness gags last week will surely appreciate the generic Oscar gags this week” — or if the Blondie creative team truly believes that almost everyone has a certain amount of interest in a core set of cultural touchstones. If it’s the latter, they’re probably the last real idealists left in America.

Anyway, I do wonder about the creative process that led from “how can we cash in on America’s Oscar fever” to the punchline “he just gave it … 3 flames up!” It seems clear that this is a reference to the thumbs up/thumbs down movie-rating metrics made famous by Siskel & Ebert 30 years ago, which is an acceptable cultural horizon for Blondie readers, no argument there. And flames instead of thumbs, sure, because of the comical exaggerated flames coming out of Dagwood’s mouth. But why three? Because if two is good, then three is better? Have they forgotten that the origin of the system was two movie critics who either agreed or disagreed, and now they’re simply treating it like a simple star rating scale? I have to say I’m pretty disappointed in this one. 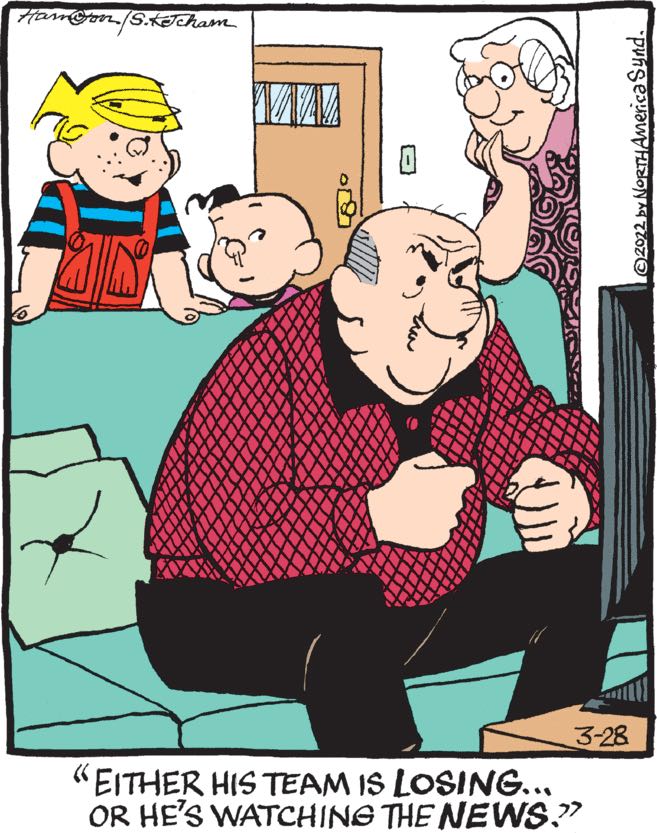 Dennis, you’re … you’re looking at the TV right now! You know what he’s watching! Are you precisely attuned to Mr. Wilson’s emotional state and know what in his media diet triggers him, but can’t tell the difference between sports being played and the news being reported? Because that’s profoundly menacing, and not in a good way.

Oh no, Rene’s got to go on the lam again before Raymond (?) hears the news! And just when he finally figured out a way to make money legitimately (selling high-quality oil paintings to foot fetishists).

I’m very excited for Crankshaft to become a hard-core anti-pharma “natural living” influencer guy, mostly because I assume he’ll be dead by the end of the week due to his various untreated ailments.