Ha ha, so, the funny thing is that Rex and June did some asking around that made it pretty clear that they were in fact very open to the possibility that Sarah plagiarized the Doggo Twins from her erstwhile teacher and then had amnesia about it! One assumes that, had they not been saved by the intervention of a kindly jailhouse snitch, their next move in their bid to save their clinic would have been to hold a press conference disavowing any relationship with or knowledge of a person named “Sarah Morgan.” “Morgan is an extremely common name,” Rex would tell any TV reporter willing to film him saying it. 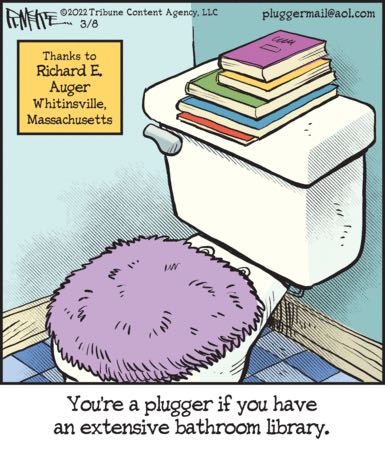 Look, fine, we’ve been hinting at since this feature debuted in 1993, but we’re just going to come out and say it: pluggers are constipated. OK? The “plug” in “pluggers” comes from the fact that their colons are plugged up. Are you happy now? Are you????

“Am I supposed to look on my phone? Also, is this thing in my hand that I’m waving around a phone? Is this what phones look like now? Remember when phones were attached to the wall by a cord?”