Oh, right, I guess I never mentioned that the owl guy had, pre-owl-stuff, been seen using hypnosis (?) to convince people to hand over money they were taking out of ATMs, and is also a classic member of Dick’s rogues gallery named “Mr. Memory.” ATM-hypnosis is in the same bank-robbing ballpark as the stuff our heroes are investigating, but I appreciate Sam pointing out that it’s not the same thing as draining bank accounts via computer hacking, at all. I suppose he could’ve just used his hypnosis powers to convince a bank employee to do the bank account draining for him. Dick, however, is very set on this computer business being at the center of things, to the extent that he’s defensively claiming that Mr. Memory needs computers to “plan” his crimes, but while the flashback scene in panel two today is completely wild on a number of levels, at its heart it’s fairly standard tying-people-up-and-holding-cops at gunpoint stuff that doesn’t need, like, an advanced AI to pull off. Maybe Mr. Memory and his gang had a shared Google Doc that they used for brainstorming ambassador-kidnapping ideas, I dunno. 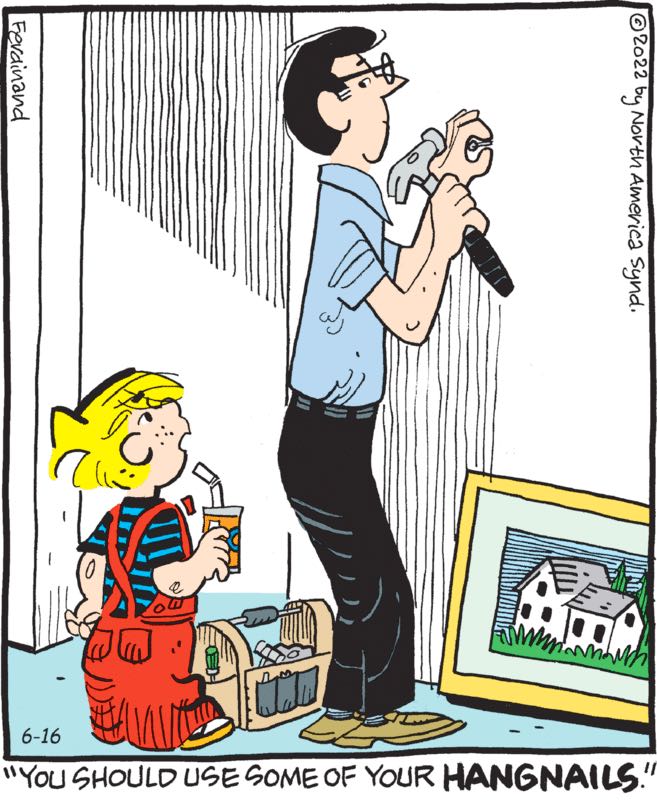 The thing about this panel is that what Dennis is saying is nonsense. What’s menacing is his attitude. Just standing six inches behind his dad while his father tries to do a little fixy stuff for once, casually sipping his soda from a straw, letting loose with some pointless advice. “You’re a dipshit, dad” is just kind of his whole vibe, you know?