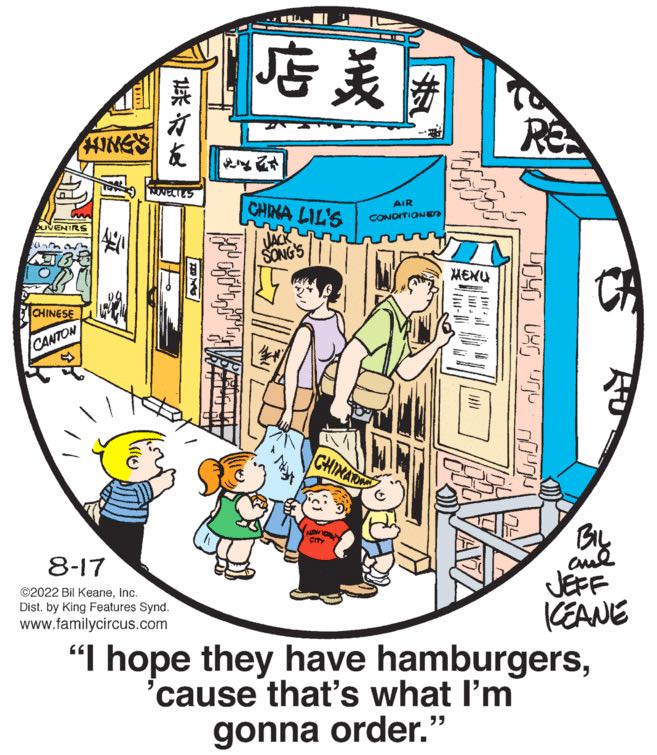 The Keanes have been on vacation in New York City for a couple weeks now, in a series of panels that are actually reruns from decades ago; Don McHoull on Twitter pointed out that the Twin Towers were replaced by the modern-day Freedom Tower in last Friday’s episode, which was a surprise to me because I had been assuming that the originals were from before the Twin Towers were built in the first place in 1972. Very little else has been done to modernize the strips; today’s, for instance, reminds us of an era when telling the world that your restaurant was AIR CONDITIONED was a solid way to differentiate yourself from your competition. Sadly, I initially misread the awning sign as AIR CONDITIONERS, and got irrationally angry at Billy (it doesn’t take much) and was about to write a whole screed here on the theme of “You little shit, you think you’re gonna order a HAMBURGER at an APPLIANCE STORE???” His actual transgressions is a bit more normal than that so I’ll leave it be. 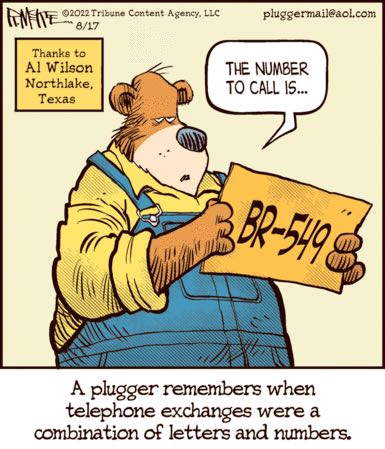 I feel very protective of the idea that pluggerdom represents a specific cultural and socioeconomic position, but here we have yet another canonical Pluggers panel taunting me with the fact that sometimes the whole gimmick is just “all-number calling was rolled out nationwide by the early 1960s, so you’re a plugger if you’re older than about 63.” Why this particular take on the plugger mythos is accompanied by a particularly pissed-off bear in overalls holding up a sign the size of a license plate that doesn’t have enough digits on it to be an actual phone number is not clear to me, but I guess Pluggers knows its business.

I am a middle-aged married man without children and so it goes without saying that I am very out of touch with what the kids today are up to, but I am given to understand they will often say they’re “talking” to someone as a euphemism for the early stages of romance, which can run the gamut from flirting in DMs to having actual sex but not yet defining their relationship or committing to monogamy. I guess the son half of this father-son duo, who appears to be 5-10 years older than I am and is therefore one of the younger characters in Rex Morgan, M.D., is at that stage in the process of wooing a nice lady he met at a funeral, but is showing his maturity by referring to it as “chatting.” Anyway, he’s gonna leave his dad alone to go get laid! Hopefully the old guy isn’t gonna drop dead while he’s gone, that would make the whole thing pretty awkward.

“Oh, yeah, your dad? Your terrible, terrible dad? I’ve been watching you turn into him for years, honey, but I wasn’t gonna say anything until you came crawling to me begging for help.” Truly Mary must completely break down her victims in order to build them back up in her image.