Sure, all the FLASH AND DAZZLE in Gil Thorp lately has been “there are trans and nonbinary characters in Gil Thorp now,” but those of us paying attention to the subtle threads have been wondering: who is Mel Gordon, Tobias’s mom, to Gil? They “hadn’t seen each other in years” when she showed up to register her son at Milford, and yesterday we learned that she thinks the Thorp kids are lucky to have Gil and Mimi, who were “so kind” to Mel, as parents. What could this all mean? Today we learn it means that Gil tried to browbeat her into having an abortion at some point, which, based on her reaction, wasn’t particularly kind, but I guess they’d let bygones be bygones, at least until the part where Gil brought it up again, right here at the Bucket. I feel like I need to know who the dude in panel one is, standing there looking depressed? Probably he’s the guy who knocked Mel up? He looks like he’s thinking “I respect a woman’s right to choose, but I sort of assumed that my opinion on the matter would rank higher than Gil Thorp’s.”

In several places, the Buddhist scriptures preserve a list that has come to be known as the list of games that Buddha would not play; these were pastimes that he and his disciples felt were “cause for negligence” and were persevered as a way to demonstrate the difference between Buddhists and other kinds of ascetics who, we’re meant to understand, are less serious about asceticism. Board and dice games are on the list, but there’s also a host of whimsical activities that provide a glimpse into what people did to kill time in an era before widespread mass media or other forms of passive entertainment. They include blowing through pipes made of leaves, guessing a friend’s thoughts, trying to guess what letter a friend is drawing on your back, and “dipping the hand with the fingers stretched out in lac, or red dye, or flour-water, and striking the wet hand on the ground or on a wall, calling out ‘What shall it be?’ and showing the form required — elephants, horses, etc.” Basically, people had to make their own fun in the Buddha’s day, just like they have to do in Hootin’ Holler, though Snuffy and his pals at least have the detritus of industrial civilization to use as props while they do it. 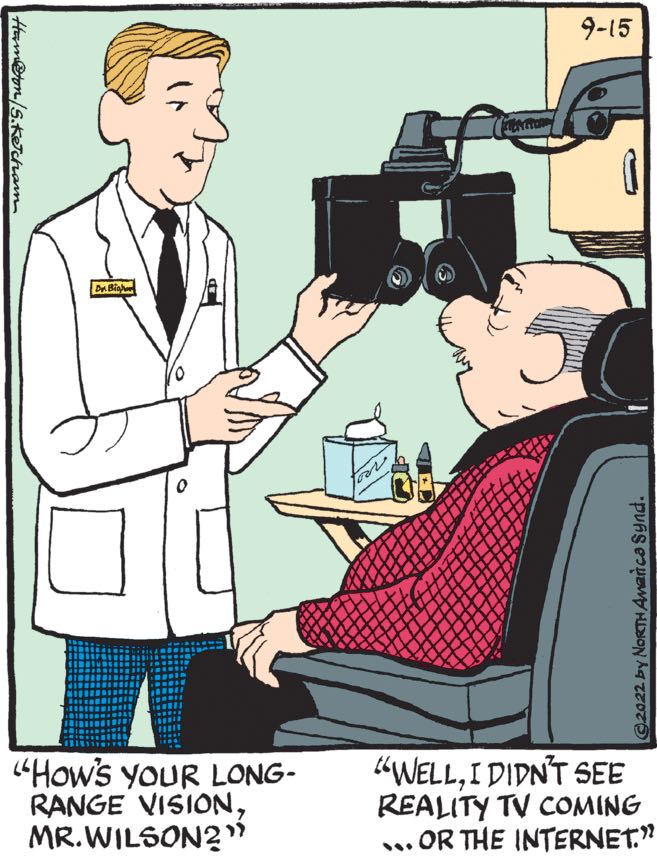 Hey. Hey, Mr. Wilson. The strip is called Dennis the Menace. We already have a comic about an old guy who’s an asshole to everyone; it’s called Crankshaft and he goes the extra mile to make puns. We definitely don’t care about you annoying your optometrist, so how about you go back to yelling at your neighbor kid, which is your actual job, buddy.