Man, it’s been a while since there’s been a Six Chix with so many specific inexplicable details as this one, and I feel like we need to kick off the week by celebrating it! “Back to the land” generally refers to a movement in the ’60s and ’70s where people rejected modern industrial society and moved to rural areas to live in ways they hoped would be more self-sufficient and connected to the earth. What does this have to do with robots? Why is the back to the land robot carrying a bindle, like it’s a hobo or a child pretending to run away from home in a old-timey comic? Why doesn’t the back to the land robot have legs? Is it significant that the other robot is plugged into the wall? Why is now a particularly panic-inducing time for this trip back to the land to happen? Is the plugged-in robot flailing his arms around in panic like the Lost In Space robot, or is he finger quoting around “back to the land”? Feel free to wildly speculate about the answers to all these questions in the comments, but I assure you that you will never figure it out.

Milford’s new trans student Tobias is also the newest Mudlark, recruited as a kicker after Gil saw him playing soccer. This is big news! The traditionalist Gil Thorp readership needs to be introduced to the idea in the most Gil Thorp way possible: by having him pull off an deranged trickeration play (a rainbow kick, to be clear, is a soccer move) that we only have described to us while two other characters that we’ve never seen before look at the off-panel action. Why is mohawk dude telling Guy “you gotta see this” when Guy is clearly looking directly at the football field, just like mohawk dude is? Did Guy close his eyes so he didn’t have to see the woke hellscape? This too is classic Gil Thorp, and I appreciate it.

Oh yeah, in Rex Morgan, Hank Jr. and his long-distance girlfriend got married! It all happened off-panel, but don’t worry, they’re here to assure you that it wasn’t very interesting and you didn’t miss anything. 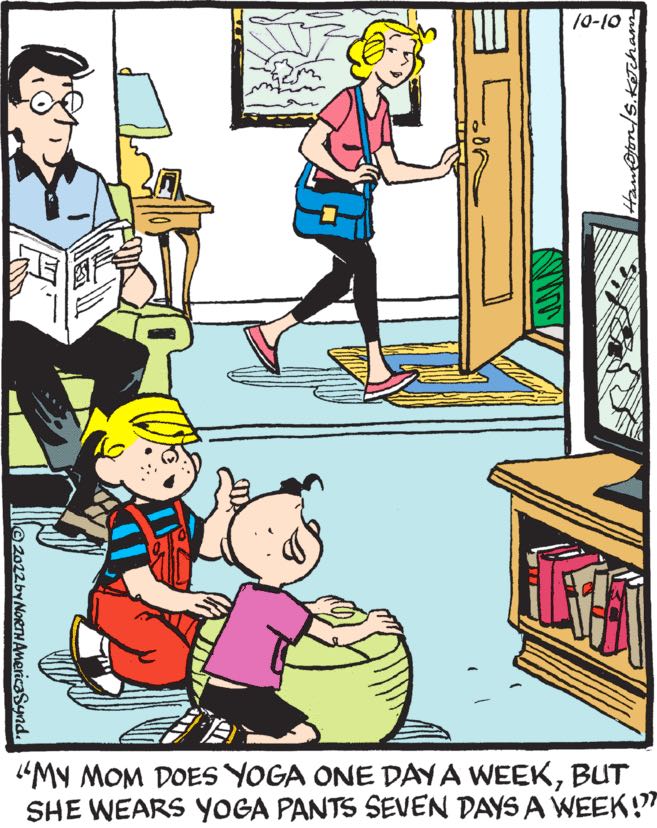 Ugh, it’s called athleisure, Dennis, look it up. I guess it’s kind of menacing for an eight-year-old to sound like a furious senior citizen writing a rejected letter to the editor about how women today dress like whores in public, but maybe not in the same spirit of menacing as the strip title intends.