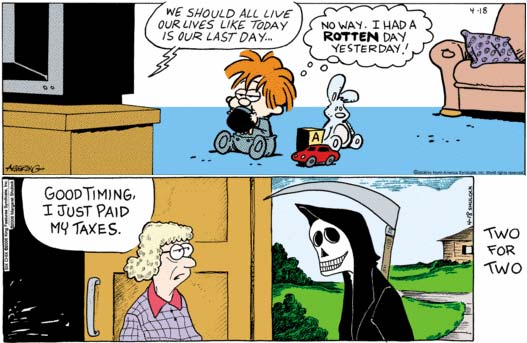 Boy, here’s a cheery pair. Marvin is funny because, awwww, he’s too young to understand the concept of death! Isn’t that precious? He isn’t constantly stalked by the terrifying specter of his own mortality! How cute!

What on earth have his parents parked him in front of to distract him while they eat/read/have sex/pretend for one precious moment that their life hasn’t been ruined by a baby? Too many inspirational Lifetime movies can warp his tiny developing mind.

Also, if I were forced to wear that hideous grey union suit as a baby, I would have figured out what it meant to die … of embarrassment!

Six Chix, meanwhile, is funny because … well, I guess it’s funny because this old lady is going to die! That’s a knee-slapper, all right. Unlike Marvin, she has a grim, joyless look that says that she’s known all about death for some time, and frankly thinks it’s time to get on with the whole thing. So come on, hellish, grinning demon from the netherword, let’s get this show on the road! We can pick up Tommie’s favorite patient on the way!

If Curtis is going to insist on doing a zany, contrived storyline where Curtis accidentally signs up his dad to give blood, the thing he fears the most, then I have to say I think it’s very clever to do it this way: with the hijinks implied (“I saw it on the news!” “…and the firemen were able to get me down out of the tree!”) rather than actually trying to put everything in panels. Nevertheless, the word “happy” in panel one is smack dab between two of the most inappropriate quotation marks in comics history — and this being Curtis, that’s saying a lot. In fact, I’ve decided that when you abuse the noble quotation mark this badly, you must suffer the wrath of … Quotin’ Margo!

By the way, kids, don’t try to air-quote like this at home; Margo is especially suited for this activity because, as Uncle Lumpy pointed out when I posted the comic this came from, she’s got six fingers on each hand. Yikes!

OK, seriously Darby, I can’t go down this road with you. Just let me know when you get back from the brink, I’ll be waitin’ for ya.