Poor White Trash Momma; she looks so hurt in the last panel. It’s like she was excited about finally actually using her chemistry degree and now Nikki just made it seem so dirty. Some lab safety advice, dear: you might want to get a longer shirt, because when the makeshift equipment explodes (as it almost certainly will), you’re going to want to have as little exposed flesh as possible.

It’s about time that Rex Morgan tackled the meth epidemic sweeping across the lower economic strata of America. Despite this strip’s attempt to engage with cutting-edge social problems, it was beaten to that particular punch by more than two years by Mary Worth of all things. And speaking of that, can we please, please, please count on this fellow being WTM’s boss? 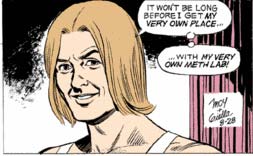 If you’re tragically unfamiliar with Tommy the Tweaker — surely one of the greatest Mary Worth characters in living memory — start here and work your way forward. 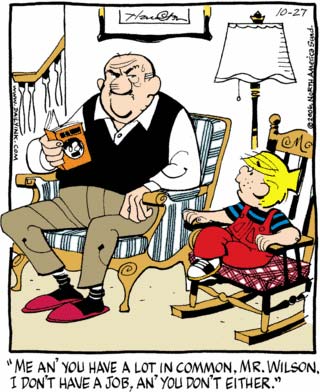 The thing that really bothers me about this panel is the single bead of sweat on Mr. Wilson’s forehead. I’m pretty sure this is his last moment of sanity before he snaps into a child-murdering rage.

Meanwhile, in Mary Worth, Ella is wasting no time in getting busy with the local ladies. First stop: Iris Beedle, mother to the aforementioned Tommy and, improbably, girlfriend to Commandante Combover, who’s strolling rather smugly about six feet in front of her. Iris’ dating history indicates that she’s generally been of the heterosexual persuasion, but a relationship with Wilbur would probably be enough to turn anybody off men forever, so it shouldn’t be a surprise that she’s eager to take a detour to “discover” things “about each other” with a total stranger without even bothering to say goodbye to her boyfriend.

Perhaps the first sign of Iris’ disenchantment with Wilbur is that she’s stopped dying her hair. Ella loves you just the way you are, dear: a nice brunette in purple pants.

Everybody had State College Bobby down as a threat to poor Raju, but here he’s showing off his cultural sensitivity as he stands up to Shiny-Headed Mohawk Man. Sadly for him, though, there are, in fact, people from India who belong to tribes, but it’s the thought that counts.