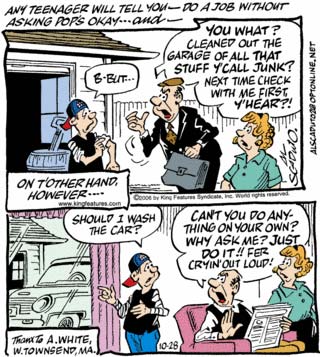 TDIET exists to give whiny, petulant voice to the sort-of-but-not-really voiceless, and thus I always assume that whatever character is best expressing that classic look of quizzical put-upon-ness is meant to stand in for whoever sent the idea in to Mr. Scaduto in the first place. Today’s episode is an elaborate fantasy in which helpful teenagers are constantly thwarted in their attempts to pull their weight in the household; thus, we can only assume that “A. White” is the helpful baseball-cap flipping, vest-wearing cool cat. The idea that a teenager might be a regular TDIET reader is truly horrifying, however. Please, please tell me that, like David Tarafa, A. White is a plucky young Curmudgeon reader. PLease?

Another possibility is that A. White is actually the silent but clearly horror-stricken mother in this scenario. She’s too terrified to stand up to her obviously rage-filled hubby on her kid’s behalf in person, so she’s hoping that his favorite cartoon feature in the Boston Herald will show him the error of his control-freakish ways. 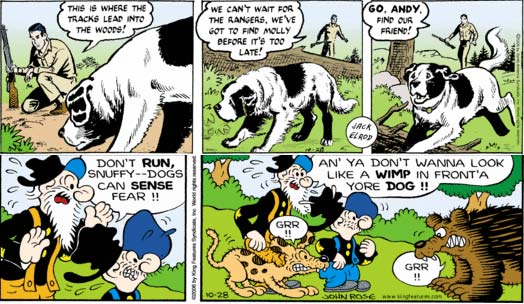 “Yeah, Andy, we’ve got to find Molly! And by ‘we,’ I mean ‘you.’ Go find our friend! I’ll be here with the gun … you know, if you need me … or whatever.” This strip just further illustrates that there isn’t a single featherless biped in Mark Trail who’s worth a damn. I hope that after Andy and Molly take care of the brothers -ake, they turn on Mark and his friends, and then rule over Lost Forest like the King and Queen of the Beasts that they are.

I offer this Snuffy Smith for comparison, to illustrate how Mark Trail is hopefully going to play out in a few days. That “Grr!!” coming out of the bear is meant to be menacing, but comes out just sort of cute and Molly-like.

The Ghost Who Walks Very Uncomfortably In His Tight, Tight Pants is offering a lovely ass shot in the first panel (this one’s for you, bootsybrooks!), but I’m more looking forward to next week’s thrilling factory tour! “And in here is the break room … you can see we just got a new refrigerator … now down here is the factor floor, and here’s the conveyor belt … an interesting thing about this model is that it was first designed to accommodate a five-foot-wide belt, but they’ve been able to expand it to accommodate our shipping containers, which have had to get bigger because of changing packaging regulations…”

God damn it, is this strip going to be about not making assumptions about people based on first appearances, and about how people who seem very different might have a lot in common, and could even become good friends? Because that’s going to blow.

Oh, 4Evah and Eva’s public humiliation is going to be delicious.