You know, suddenly this is the first Funky Winkerbean sequence I’ve unironically enjoyed since I rejoined the new gloomed up version of the strip. I love the musical notes floating in the air — is it stripper music? Is it Christmas music? Is it somehow, wonderfully, both? I love the way that Santa’s thick black belt, such an iconic part of his thoroughly asexual garb, has suddenly been transformed with a vague aura of S&M. But mostly, I love the way that everyone is leering at sexy Santa with naked lust — except for the mother-to-be, who looks on in unalloyed horror, as if only she can see how very, very wrong this is, and she’s thinking, “My God, has everyone else gone insane?”

Wow, so yesterday when I guessed that this was Alan’s beatnik buddy I was pretty much kidding, but it looks like it actually is … I think. Just like I think that’s Alan in panel three in the cowboy hat. Or maybe it’s Lu Ann’s cousin Blaze, who’s partial to cowboy wear. Or even Eric Mills, whose Hat Man tendencies might go both ways, if you catch my drift. God damn, this feature would be easier to follow if the men didn’t all look a alike. 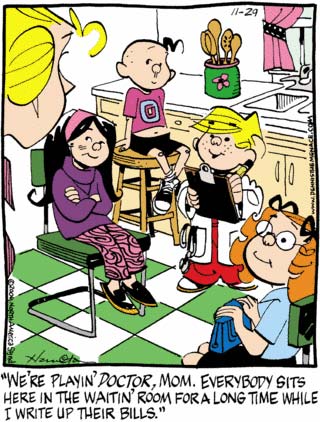 Dennis further erodes his Menace status by getting a co-ed group together and then playing the least threatening game of doctor in the history of prepubescence. Joey, meanwhile, is looking more like a child prostitute with every appearance in this strip.

You know, I remember the good old days, when the press would focus on the issues, like the fact that Randy Parker is unmarried and therefore almost certainly a homosexual and thus totally unfit for the bench, instead of feeding the politics of personal destruction and mentioning the fact that the totally heterosexual and not at all gay Reggie Black’s wife’s breath stinks of liquor. Jackals!

Wait, Brad was planning on painting his living room black? Did he buy a blacklight and some Cypress Hill posters too? Did he think he was going to star in a spinoff strip called Brad and TJ Are Really, Really High All The Time?

When did June become the villain in a Dickens novel? And when did Rex Morgan start shilling for McDonald’s?