If there’s one thing we can count on in this crazy mixed-up world, it’s the deep satisfaction that comes from seeing Mark Trail punch an armed man in the face. Man, that’s good stuff. Note that Mark’s raw power is enough to not only blast Snake into the next panel, but to change his shirt from blue to orange and blow the hair right off the sides of his head. Physics and logic are no match for a Trailian knuckle sandwich. I can’t wait to see how Jake’s sideburns and mullet will react to what he’s got coming to him. Forecasts call for heavy bold lettering for the next few days.

I stared at this strip for an awful long time before I finally gave up on it. I sort of assume that any joke about “the real purpose of school busing” is somehow about the evils of the commingling of the races, but I really can’t suss that — or much of anything else — out of the “punchline.” My best guess is that it’s about having sex in the back of a school bus. The line underneath the word “learn” goes right into my soul and shatters my need for everything in this world to make some kind of sense.

See, it’s like they know computers exist, and have seen them in pictures and know how to draw them, but they’ve never actually used one, so they don’t know about their more obscure features, like the delete key. 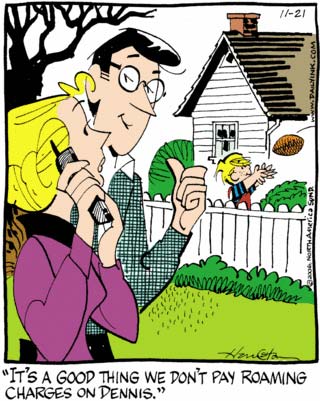 “Or is it a good thing? Imagine if we could pay someone to take care of Dennis … someone other than us … who lived far away … far, far away …”

I’m frankly a little concerned that the Mitchells consider Dennis playing in the next yard over to be “roaming.” That strikes me as a mite overprotective. Watch out, kid, or you’ll end up in up in some kind of subterranean gulag.

OH MY GOD MOST AWESOMELY AWKWARD THANKSGIVING EVER!!! It actually seems pretty likely to me that, just to add to the discomfort, Gina will somehow invite herself over, thus ensuring that someone — or better, several someones — will be attacked with a turkey-carving implement. I wonder what disaster killed off all of these people’s families, leaving them to spend Thanksgiving with each other. I also wonder what kind of hat Margo will wear to dinner. Maybe she’ll dress up like a Pilgrim!