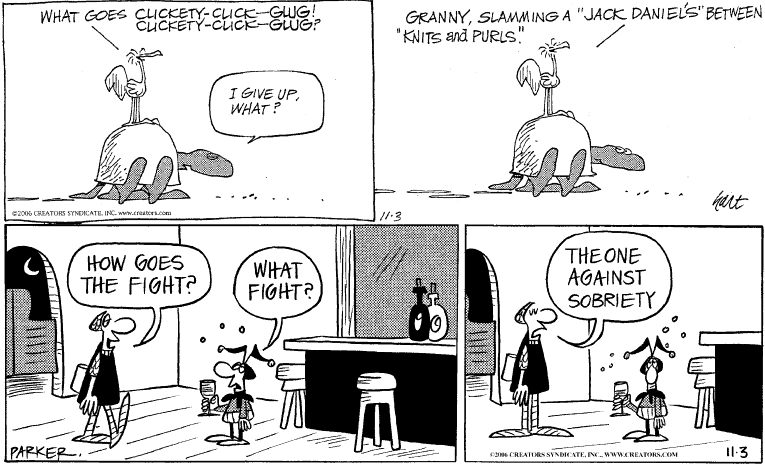 Here’s a true comics fact that I find endlessly fascinating: Johnny Hart, the deranged mastermind behind B.C., is also the writer (but not the artist) for the Wizard of Id. This is interesting because B.C. is, as frequently noted here by me and others, totally deranged these days, whereas the Wizard of Id is, if not breaking any new comedic ground, actually still kind of funny. Today’s strips, both on the topic of sweet, delicious, tempting, demonic booze, illustrate the point nicely. B.C. is pretty typical of the strip’s current loopy state: the weird verbiage, convoluted but not particularly funny, the setup that’s ultimately just one character telling a joke to another, and the punchline that’s dependent on a series of odd assumptions and that seems like it might, in a parallel universe, be funny, but in this one is not. Now, a lot of you cruel bastards have taken this to mean that Hart has just lost it. But take a look at this Wizard of Id, which is itself typical of the strip’s style: blunt, dry, to the point, and actually driven by some cursory knowledge of the strip’s characters. In other words, ol’ Johnny is fully capable of working within the constraints of what makes a comic strip funny and normal; but in B.C. he’s made a conscious decision to follow his own meandering muse. Which in some ways is all the more alarming.

Meanwhile, the Story of Lu Ann’s Magical Mysterious Attic has apparently been outsourced to a Brontë sister. I’ve been all in favor the new interweaving storylines in Apartment 3-G, but we need more of Tommie teasing married men with her awkward sexuality and Margo threatening people with bodily harm and less of Lu Ann’s maybe-supernatural loft space. Yesterday we were teased into believing that this pile of bedding was someone asleep on the bed; presumably tomorrow we’ll learn that there isn’t actually anybody in the next room, but that someone has accidentally left the radio on in there and it happens to be playing Li’l Jon’s latest hit, “Hello, Anyone There? (Feat. Ying Yang Twins).”

If Alan and Eric Mills and, hell, Margo are all conspiring to drive Lu Ann insane à la Gaslight, though, all will be forgiven and then some.

If you haven’t been following Dick Tracy (and really, who could blame you if you haven’t?), Dick has acquired an experimental device that can read minds. This turns out to be much, much less interesting than it sounds, as so far he’s only used it to annoy his officemates. I just wanted to point out that one of his coworkers is apparently Lara Flynn Boyle, seriously slumming in some kind of Nehru-collared shirt.

Lord alive, I hope the dog eats that baby.