Oh, who the hell am I fooling. TRUE LOVE CANNOT BE STOPPED.

Aw, see, Mary? She’s just as scared of you as you are of her! It’s like it is with bears! And speaking of bears…

Huh, some of that dialogue seems awful familiar … almost as if I’d heard it before somewhere else. But where could that have been?

God damn it, Mark Trail, don’t you move slowly enough without, you know, just repeating the same damn dialogue over two strips? At least Jake and Snake have swapped lines in what’s suddenly become some kind of low-rent, heavily armed Waiting for Godot. The giant rabbit has fled, presumably out of boredom.

I do have to admit that if I were in the process of being kidnapped by mulleted cabin-dwelling bearnappers, I would be profoundly uncomfortable to learn that my fate would be determined “back at the cave.”

I’m not resentful that I spent five minutes staring at Slick Smitty’s coat, trying to figure out if the fact that he was wearing a suit and had rolled up his sleeves was a clue about the origin of his latest flight; nor do I begrudge the fact that the crucial clue to this puzzle is Smitty’s watch, which is completely illegible. Rather, I take umbrage on behalf of our broad-tailed, buck-toothed friend. Why is he just “the beaver”? Why doesn’t he get a patented Slylock Fox clever name, like “Bobby Beaver” or “Buford Beaver” or maybe even “Castor?” Instead it’s just “the beaver,” like they’re all alike, like their individuality doesn’t matter. This strip is racist. 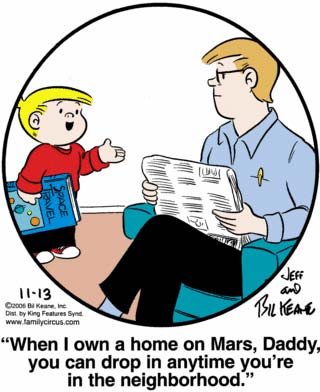 Translation: “When I grow up, I’m going to move as far away from the rest of you losers as the science of the age will allow.”

Wow, Marvin sure isn’t afraid to disparage Italians. Good thing none of them live in Indiana, right? Right? What? Uh oh.