“That’s right, I won’t stop there! I’m also going to break out into this elaborately choreographed dance routine! ‘Hey fella … don’t see Ella … that’s my advice to yoooouuuuu … She’s no psychic … you won’t like it … She’s crazy, she’s old … and something of a scold!'”

I can’t wait to see what sort of devastating rumors ol’ Tom Dewey’s going to be spreading about Charterstone’s resident psychic advisor. “Hey guys, you know that 92-year-old woman living in the condo complex who I went to for psychic advice on my complex business dealings? Well it turns out she’s crazy! No, she’s crazy! No … what are you laughing at?”

I’m going to pass quickly over the sub-Foxworthyism that is the joke in today’s Pluggers (“If your working mailbox sits inside your non-working mailbox, you might be a plugger”) to snicker snidely at the name of the Muncy, PA, resident who sent this in. Please, somebody tell me that this is a cruel joke perpetrated by central PA hipsters, or some kind of down-home country cultural reference of which I as a city-dwelling elite snot am ignorant, rather than somebody’s actual name. What I’m trying to say is, if you name your son “Chubby Fry,” you might be a plugger, and you’re definitely determined to make sure that he’s a plugger. 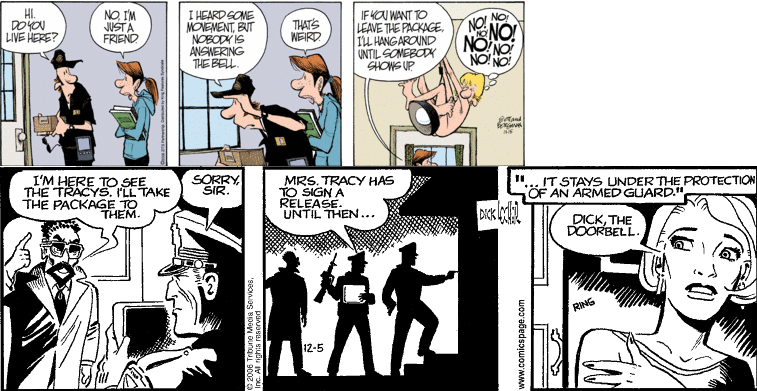 I offer these two strips to showcase how the comics treats delivery personnel stumbling into wacky comics-style situations. For reasons too boring for me to go into here, the Tracys have had their minds erased for Dr. Froid’s sinister purposes and Jeremy is naked. Now, I’m not an expert on automatic-rifle-handling techniques, but I’m kind of dubious about the way that the Brinks man on the left is holding his weapon in panel two of Dick Tracy. I’m pretty sure that the only time I’ve ever seen anyone wielding a gun like that was when he was standing in the back of a pickup truck with a bunch of other guys on their way to seize the city’s central marketplace from a rival clan’s militia.

As for the clotheslessness dilemma, I have to say that I don’t think the thought of my girlfriend “accidentally” finding me naked in high school would have traumatized me as much as it apparently does Jeremy. I’m not saying anything good or non-scarring would have come of that had it actually happened, but I think I would have been more open to it before the fact.

You know, both Mary Worth and Apartment 3-G are heavily into supernaturally-themed storylines right now — just in time for six weeks late for Halloween! Personally, I think Lu Ann’s found her perfect man: dedicated, distant, and invisible. Mostly, the Amazing Tale Of The Mysterious Haunted Studio is reminding me how damn boring the Lu Ann plots are. I think I speak for us all when I say: bring on Margo and Eric’s wacky antics, which should play out like a methed-up version of The Lady Eve. Even glum Tommie’s stories have a mopey grandeur compared to this goofy twaffle.

Trust me, you do not want to know what just happened in that van.