Damn you, O cruel gods of Mark Trail! Can’t you let our beaver friends maintain their newlywed bliss at least through Christmas? Must our orange-teethed rodents be face uncomprehendingly with hostility on the day the Prince of Peace was born to redeem the original sins of irate property owners and furry tree-gnawing beasts alike? Is there no justice in this world?

Is Lucky and/or Mrs. Lucky holding a rock in his/her adorable little paws in panel one? Because I’m, um, pretty sure that never actually happens. 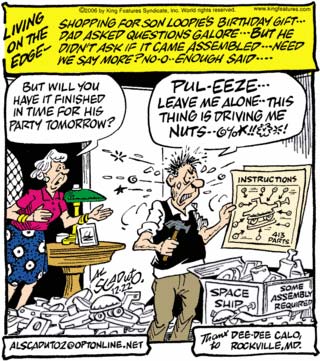 OK, I’m going to pass lightly over the fact that the “parent can’t put together kid’s toy” joke is passed beyond “classic” and “dated” status and gone right on to “musty,” and the fact that little Loopie’s “space ship” looks like a roller skate wearing the Tin Man’s scalp as a hat. What mostly amazes me here is that this TDIET was published on December 22, and yet the ground-based UFO in question is portrayed as a birthday present, rather than the more obvious Christmas gift. Did we need the urgency of the party being tomorrow to really bring home the stress of dad’s “living on the edge” lifestyle, but there’s already something lined up for the 12/24 panel? Or is TDIET in the vanguard in the liberal media’s implacable War On Christmas?

The first use of “playing the cello” to describe this position that I’ve encountered was in Diane DiMassa’s Hothead Paisan: Homicidal lesbian terrorist comic series from the early ’90s. Sadly, since Mother Goose and Grimm appears in family-friendly publications, this strip had to be censored, since the phrase clearly refers to a cat licking its ass. If a child saw a feline applying a tongue to that part of its body in a cartoon, that child would obviously go blind and insane, so it’s a good thing that this bowdlerized version was used instead.

Part of Ruthie’s charm is that she straddles the line between “imaginative” and “delusional,” but the phrase “I know the smoke detector is really one of your hidden cameras” is clearly the product of the mind of a budding paranoid schizophrenic. This kid will be in a straight jacket in a rubber room by the age of 13. Presumably she’ll have a heart-warming malapropism ready for the situation.

In case you’re wondering, Undersecretary Denton’s extrajudicial beatdown has now entered its eighth day. It’s been pretty rough going, though I suppose more so for Denton than for me; today President Luaga manages to get three POK!s out of a single left hook somehow. Anyway, this comic amuses me mostly because of panel three, in which Denton’s administrative assistant gets to live out every white-collar underling’s dream by punching her boss in the face.