One of the things that Mark Trail is ostensibly supposed to do is to teach young people about the ways of nature. That’s why we’re lucky that no young people actually read Mark Trail because the last thing you really should do if you encounter an injured animal — particularly an injured animal with enormous, powerful teeth that it’s temperamentally prone to going all bitey bitey with — is to pick it up. Fortunately Mark is like a modern-day St. Francis with his animal-charming powers, although somewhat more enthusiastic about punching hillbillies in the face than the good man from Assisi.

At some level, Mark knows that his reckless beaver-handling isn’t a good example for young people. That’s why Rusty has magically transmogrified into a full-grown adult in panels one and three.

I could think of any number of mildly amusing punchlines that might have made incrementally but noticeably funnier use of the setup provided here. What appears to have happened is that someone at Hagar Central remembered that, according to the meticulously maintained and elaborate Hagar the Horrible canon, Hagar is actually illiterate, and reference to that fact had to be added in at the last minute lest all the Hagar nerds (chosen name: “Horribles”) tear this strip to pieces on the many, many Hagar fan sites.

Niki, I warned you that “bad June” would be back before too long. If “painting the garage” is anything like “cleaning the basement,” a euphemism thought up by Mrs C. and her filthy-minded college friends, Niki had better hope that his jaw is back in top shape. 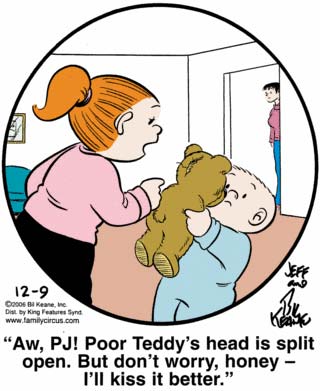 There’s something unspeakably creepy to me about Ma Keane standing in the doorway in the background of this scene, looking on at these crimes against pretend medical science silently and expressionlessly. It’s as if she’s watching another step in an unfathomable and long-running plan of her own design playing out. I’m not sure what that plan is, but it’s a good guess that it involves somebody’s freakishly oversized head being split open.

Later, after the drama is resolved: “Yeah, honey, it was reverse psychology! Yeah, that’s the ticket.”