WOO-HOO, VON’S HERE, YEAH! And he’s … well, he’s kind of underwhelming, actually. Typical boring WASPy Mary Worth dude. More intriguing is Vera’s immediate deployment of karate moves against him — she’s clearly been taking classes in physical and emotional self-defense. Also, now that Vera’s had dinner with Mary and received the old biddy’s tentative stamp of approval, she’s permitted call upon the creepy, silent cast of Charterstone extras for protection. Von’s right to cower; the close-mouthed creeps will shuffle at him wordlessly and then smother him with their poorly drawn hands unless Vera calls them off. 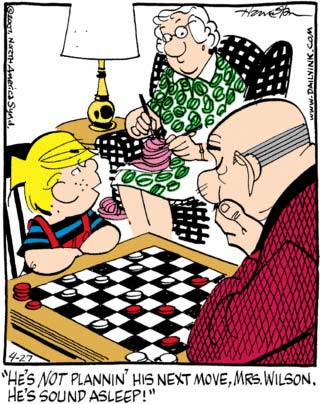 It’s also possible that George has just quietly died sitting up. In which case Dennis wouldn’t be so much “menacing” as “creepily affectless.”

So here’s an odd little story: faithful reader Bob Byrd actually forwarded this strip to me a week ago. Apparently it appeared in place of Tank McNamera on the Yahoo comics page last Wednesday, which is pretty bizarre because the two strips are handled by different syndicates and Yahoo doesn’t even carry Rex Morgan. You’ll note that this is not the usual King Features in-house coloring job: the color palette is more muted, the flesh tones more realistic, and there’s not a bit of electric blue in sight. The graphic is also bigger than what King usually syndicates.

Anyway, it’s been fun sitting on this for a week and watching the strip feebly setting up Rex as having something like a shred of integrity, since I knew he would throw his highfalutin’ moral qualms to the wind as soon as he got rubbed the wrong way by some rich Brit. The good Dr. Morgan is a pillar of the community and he’ll thank you not to forget it; he doesn’t like being treated like a common chauffeur even if he shows up at the airport with a sign bearing the name of his passenger and doesn’t identify who exactly he is. Rex doesn’t really care about his friendship with Heather or even his stock portfolio, but treat him like the hired help and he will fuck you up — in this case, by driving you around reeeeaaal slow-like, which should be thrilling to watch.

Oh man, not only does Clambake have vaguely obscene batting advice to offer, but vaguely obscene pitching advice as well! Yes, Mark’s big hands will be perfect — especially the left one, with its long, pretty fingernails.

It’s interesting to note that, while it took months of hectoring from the stands to get Lisa Wyche’s mom an unpaid position as an assistant coach for the girl’s basketball team, Coach Thorp has pretty much handed over his team to this deranged old coot in only the second week of practice. Gil is presumably hanging out under the bleachers smoking a joint or something while Otha Yancy holds hands with his pitching staff.

(By the way, unbelievably only one person has purchased Clambake gear so far. WHAT THE HELL IS THE MATTER WITH YOU PEOPLE? HE’S CLAMBAKE, FOR GOD’S SAKE! CLAMBAKE!!!!)

That look of bug-eyed ecstasy in panel three comes from the feeling of climax that America’s greatest detective only gets from killing a perp with his bare hands. (The stiff, uplifted angle of his tie is suggestive here.) You might think that falling head-first into a smokestack and presumably being scalded to death is a particularly convoluted and gruesome way to go, and you’d be right, but you have to keep in mind that Dick Tracy has been leaving a trail of villainous corpses in his wake for 130 years or however long he’s been in the newspaper, and it’s hard to not repeat yourself. This is a strip that, in its first appearance in this blog, featured a pair of folks dying as a flaming wind generator plummeted to the ground, so expect the bizarre.