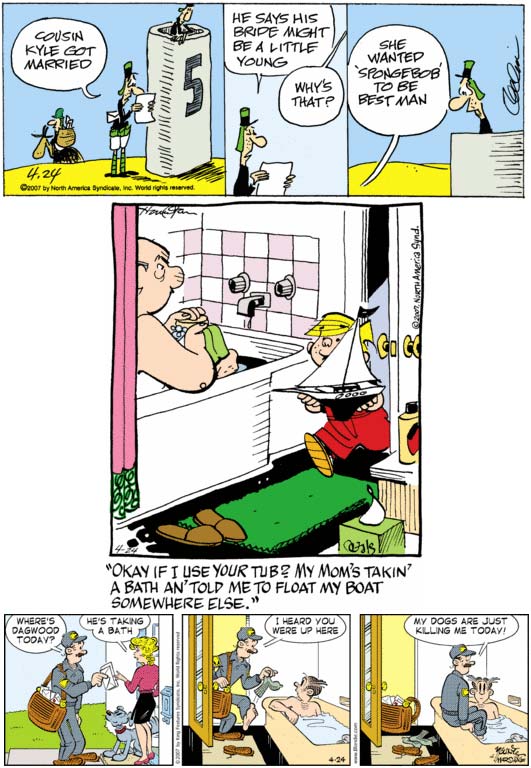 There are some days — like today, for instance — when the comics make a mockery of the very concept of “family entertainment.” In Crock, one half of the Foreign Legion detachment assigned to Guard Tube #5 blithely recounts a missive from home regarding his cousin’s new child bride, while his troopmate goggles in disgust at the the thought. Does the Legionnaire capable of decency speak out against this horror and risk alienating his only companion in the brutal desert? Or does he remain silent and thus complicit in this crime? Meanwhile, even if we ignore the more unsettling aspects of today’s Dennis the Menace, we should still note Mr. Wilson looks completely blasé, as he’s apparently wearily resigned to the fact that there is no place and no condition in his life that can not be violated by the demon child next door. Similarly, Dagwood only looks on in mute disbelief as his old nemesis the mailman places his feet on his genitals; Blondie certainly didn’t try to stop him, so he figures he doesn’t have the right to say no anymore.

For those of you keeping score at home: Rex has been assigned to stall Hugh Avery so that Heather and Pete the chauffeur can get to the big board meeting and pull off whatever coup d’etat they’re going to pull off so as to seize control of Avery International. Meanwhile, today Hugh is ordering his unnamed second to stall the board meeting so that Hugh can get there in time to pull of his coup. In other words, there are currently rival attempts being set in motion to make sure nothing whatsoever happens in any way, shape, or form. And then of course there’s the thrilling cell phone reception subplot. In short, it’s pretty obvious that this week’s Rex Morgan, M.D., is an elaborate physics experiment designed to show that time can in fact be brought to a halt, and perhaps even reversed.

Having taken care of the insurance fraudsters, Mark has moved onto his next big quest: eliminating labor unrest in the bird world. Subversive elements are fomenting a Red tide among our winged friends, and Mark’s on the case to make sure that the good old-fashioned American values of open labor markets aren’t destroyed by these feathered pinkos and their socialist ideas about “collective bargaining.” With desperate characters like the Avian Wobblies in charge, things could get a little rough, so Andy (who disturbingly appears to be melting in the first panel) has headed out into Lost Forest to fetch the bird Pinkertons to fight on the side of the American way. 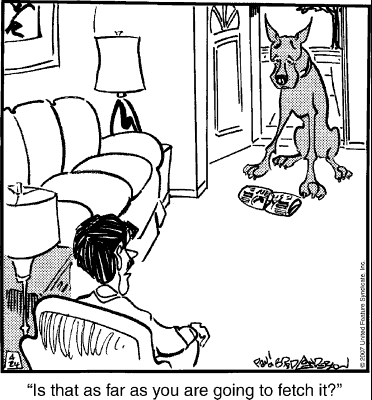 After years of trying to figure out what object his owner Phil loves most, Marmaduke has settled on the perfect bait. Poor Phil is about thirty seconds away from being killed and eaten, and not necessarily in that order.