I am desperate to know more about Margo’s assistant Sam, and not just because I can live out through him my longstanding fantasy of scrambling to carry out Margo’s imperious orders. Look at that wide-eyed wonder in panel two: “Ladies in New York get married? GAWRSH!” I think Margo just stood outside the Port Authority bus station one day, waiting for someone attractive and not-too-bright to step off a Greyhound with small town hopes and big city dreams, and hired him on the spot before he learned the details of typical New York pay scales. However, his cynical look of disbelief at the word “love” in panel three indicates that New York is already wearing down his soul.

There’s always an ongoing struggle for the coveted title of “Unintentionally Creepiest FBOFW Character,” but Deanna is making a good bid for it today, with her near-orgasmic musings on replicating her in-laws’ family in photo-perfect detail. This of course is someone whose greatest act of initiative was to get pregnant “accidentally” by “forgetting” to take her birth control pills, which Elly probably bribed her to do somehow. Maybe the house itself is the promised reward.

On the other hand, as several commentors have pointed out, the ravine that she’s waxing about so rhapsodically is the same one where April notoriously almost drowned, with only noble Farley saving her from a watery death. Since the junior Pattersons don’t own any skilled rescue beasts, perhaps Deanna is hoping that a couple quick drownings, Mike’s subsequent suicide, and a sale at market rates of a house they bought at a steep family discount add up to her ticket to sweet, sweet freedom.

We’ve all been assuming that this mysterious figure is Canadian Cedric the Super Butler, though he appears to not be wearing Cedric’s trademark glasses, so who knows. As a commentor or two pointed out, the shadowy stranger’s use of the word “scum” echoes Nicolas Sarkozy, the conservative candidate in this coming weekend’s French presidential election, who famously and controversially used the term to describe rioting youths in Paris’ poor suburbs when he was Interior Minister in 2005. Perhaps Sarko is wearying of the hand shaking and baby kissing and has decided to embark on a little side campaign of his own … a campaign of vigilante justice. Since his intervention will deny Judge Parker readers the opportunity to see Neddy and Abbey sexily fight off their attackers with lead pipes and flamethrowers, this will just give Americans another reason to hate France once he’s elected.

Incidentally, the fact that Cedric/Sarkozy/whoever hears the punks speaking English indicates that the English we’ve been seeing in the word balloons isn’t just a translation of the execrable French for our benefits: they’re actually switching back and forth between English and execrable French. Hee.

OK, Rex Morgan, we all know that it’s fun to look at June’s breasts, but there’s a little something called “subtlety.” I mean, Jesus.

By the way, if I were Heather, I wouldn’t be all that heartened by the magical thinking of a preschooler with a hideously misshapen head. Now, if Abbey the Wonderdog had barked her vote of confidence at me, I’d feel reassured. 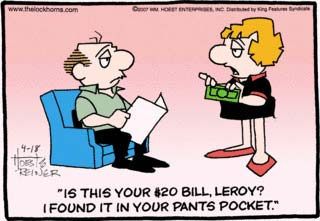 I’m not exactly sure what’s going on here. Was Leroy attempting to hold out on Loretta by squirreling away a portion of his meager paycheck for his own use? Is Loretta upset that he would cut their already cramped budget down further? It’s hard to tell whose moment of triumph this is supposed to be because they look so damn depressed. Because in the Lockhorns, nobody ever wins.